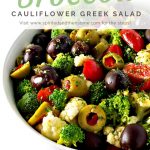 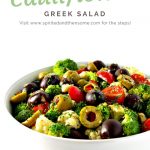 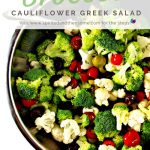 This delicious twist on a traditional Greek salad uses broccoli and cauliflower in place of cucumbers and onions. Full of olives, grapes, and a homemade Caesar vinaigrette, it’s a zesty crowd-pleaser! {Paleo and vegan-friendly}

Today’s recipe is brought to you by my former boss. She shared the original salad at a company gathering, where we all went so bonkers she had to old-school email it to us. Where we then proceeded to old-school print it off and old-school put it in an old-school binder. While I’m certain I had a cell phone at that point, I think its only function was for talking. Probably you could leave a voicemail. Anyone’s guess if I actually knew how to check messages. So this recipe has been in the Spirited family for almost two decades. And it’s still going strong.

Here’s the thing about company potlucks. They go one of two ways. Either the recipes are fantastic because offices are small and reputations are on the line. OR they are absolute dumpster fires because John used mayo instead of Miracle Whip in the potato salad. And if my late grandmother, The Gram, were here today, she’d want to know exactly WHO JOHN EVEN THINKS HE IS? Miracle Whip over mayo all the days.

Fortunately, my boss’s salad was a hit, does not use mayo OR Miracle Whip (so crisis averted), and makes enough to feed a crowd. Thus, if you need a salad recipe to share at Easter, on the 4th of July, over Labor Day weekend, during Thanksgiving, or on Christmas day, basically Broccoli Cauliflower Greek Salad is your wingman. Or wingwoman.

The original recipe calls for cheese and store-bought dressing. However, I paleo-ized this Broccoli Cauliflower Greek Salad, and created a vegan-friendly dressing that totally jazzes up the cruciferous vegetables.

So grab a large mixing bowl, some veggies, olives, and tomatoes, and let’s do this!

In place of lettuce, Greek salads often use greens, such as cucumbers. But in this salad, we’re going to use broccoli and cauliflower for the base. The result is tantalizing!

The original recipe also calls for shredded Parmesan and mozzarella cheeses. I’ve heard through the grapevine that vegan cheese has come a long way. So you could always try it on this recipe. Additionally, you can add chopped cashews or diced avocado. And, really, this salad tastes incredible without the dairy. So, there’s no need to complicate matters if you’d rather skip these variations altogether.

Use a large mixing bowl for this recipe. It will be easier to store the veggies and then toss them with the dressing!

If lettuce-free salads are your thing, then check out Paleo Greek Salad. It’s another flavorful salad! And last but never least, shoutouts to successful company picnics. Because sometimes that’s where you find the best recipes. 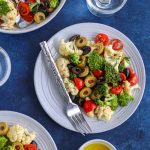 This delicious twist on a traditional Greek salad uses broccoli and cauliflower in place of cucumbers and onions. {Paleo and vegan-friendly}

For the Paleo Caesar Vinaigrette: