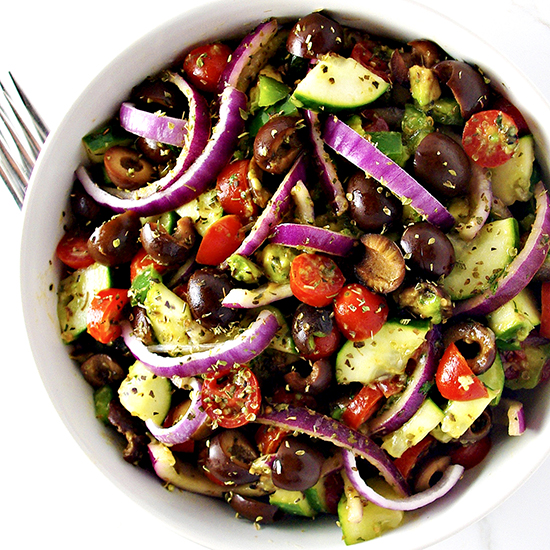 A vegetable salad WITHOUT lettuce? Yes, they do exist. Okay, so that kind of salad isn’t exactly novel. But, this Paleo Greek Salad IS. It’s so novel and it doesn’t even know it. Red onion, cucumbers, olives (black or Kalamata will do), avocado, tomatoes, a homemade dressing, and not a single piece of lettuce in sight. Also, if you think cucumbers are the most boring vegetable in the history of the modern world, well, shut the front door, sit the heck down, and munch away on this salad. Because it’s full of vegetables (and fruits too – tomatoes and avocado – wink wink, nudge nudge), and none of them are boring. Not a single one. 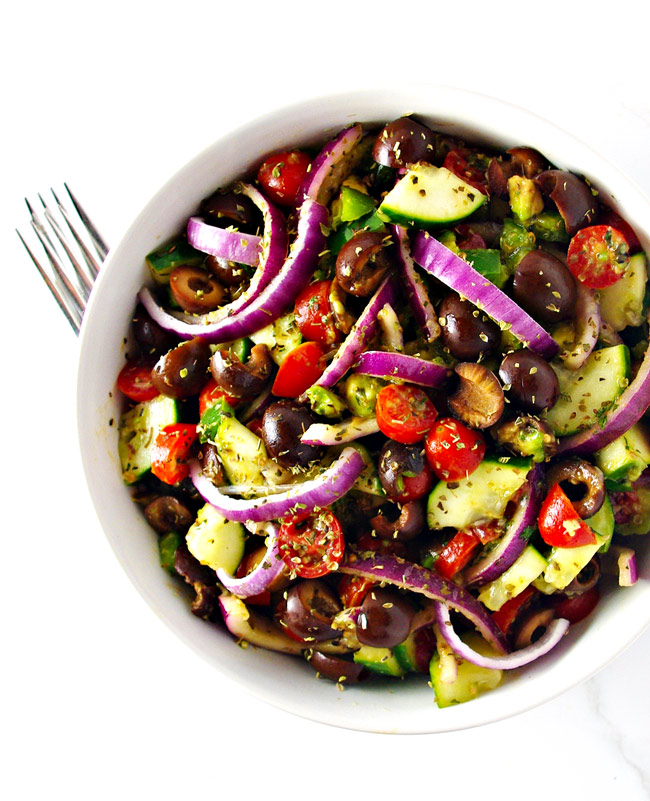 Let not the title of “Paleo” fool you into thinking this salad is light on the good stuff. Same with the fact that it’s vegan. Because Paleo Greek Salad is freaking delicious.

I felt like I was eating at a restaurant without having to hire a sitter, pay the bill, or be home by a certain time. Nope, with this salad it’s just me and my meal. K-Hubs got in on the action, and while this salad might feed several family members at once, we can’t be certain. The two of us devoured the whole thing inside of 24 hours. 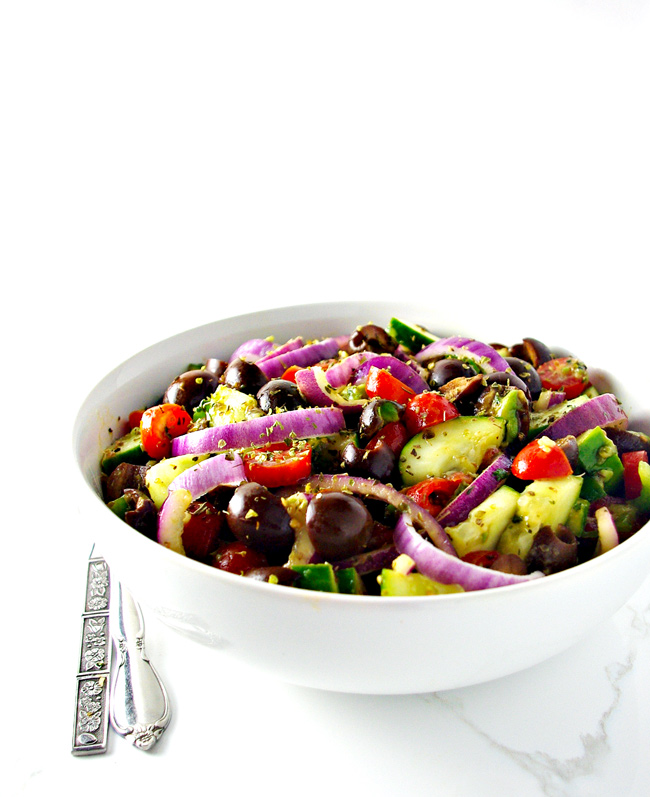 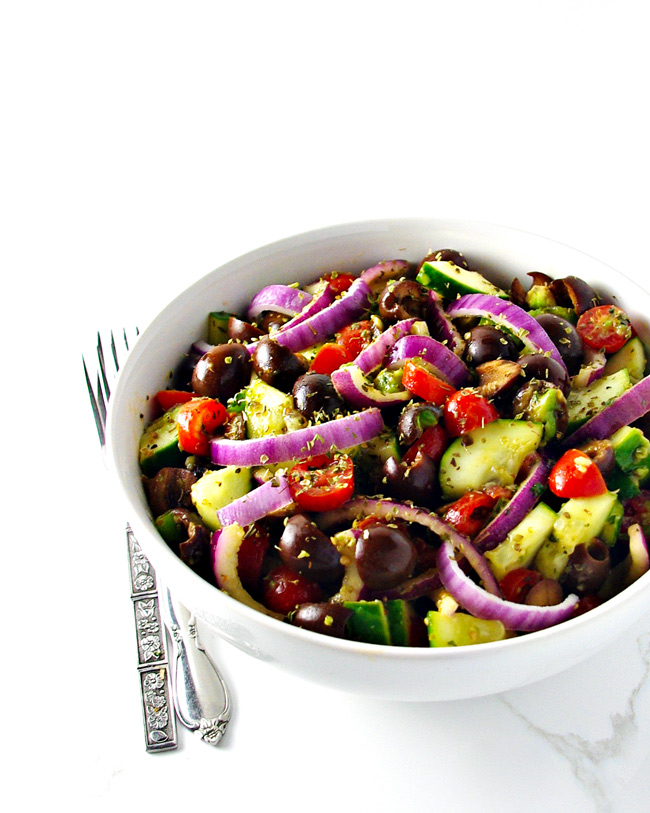 Aside from how to prep this deliciousness, probably you’re wondering whether Dr. Quinn, Medicine Woman, was on in the background while I worked away. Why, yes, she was, thank you for asking. This time Johnny Cash and June Carter Cash reprised their recurring roles, Kid Cole and Sister Ruth, for the final time. CUE EVERY TEAR I HAVE EVER OWNED. While the episode might not have been deathy by normal Dr. Quinn standards, it was still gut-wrenching. So, naturally, I had to watch it twice in the same evening, you know, just to wring out the last of my tears.

And Kid Cole and Sister Ruth weren’t even the whole of it. Nope. This episode also saw Loren getting himself into the mail order bride business. And only on Dr. Quinn can mail order brides bring viewers to tears. Someone please grab me a tissue, for my eyeliner runeth down. If you need me, I’ll be in the casket just waiting on Jesus. 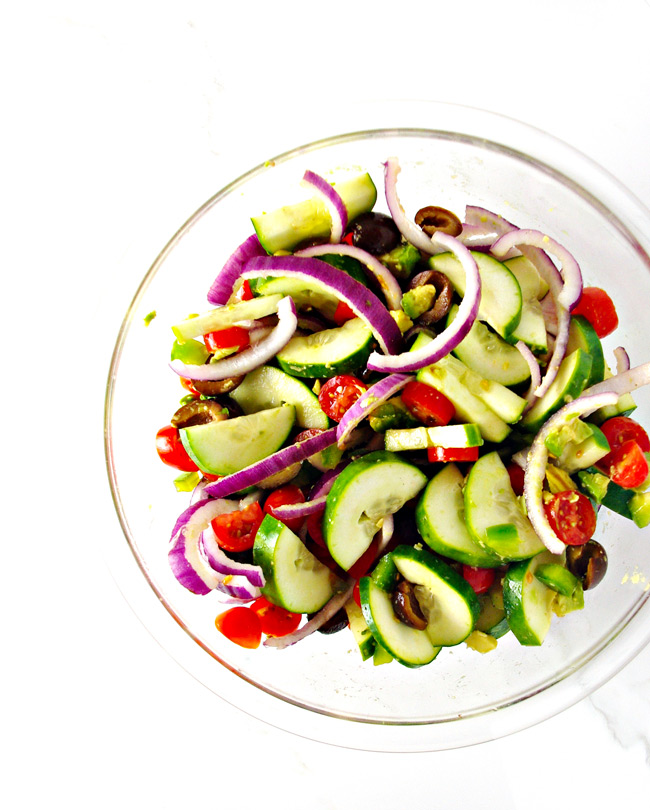 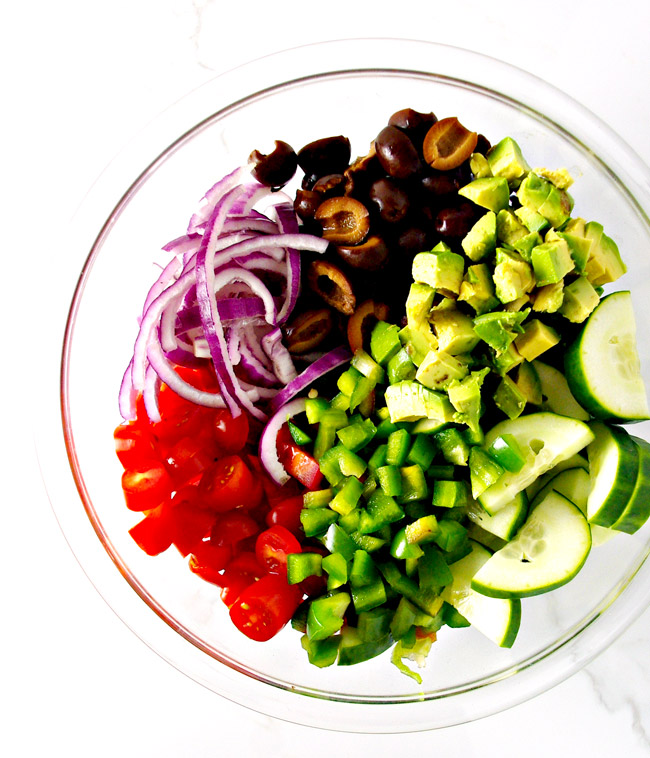 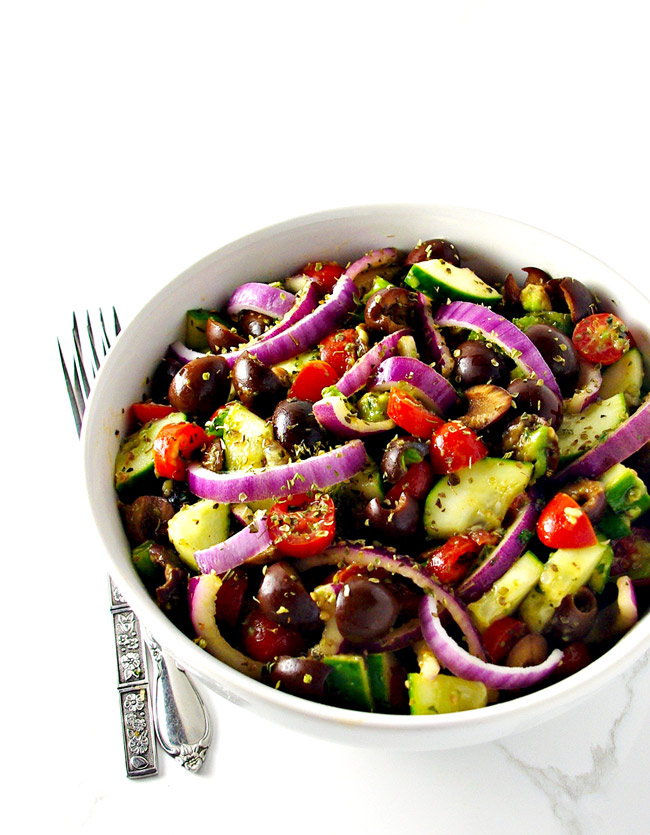 And while we’re waiting on Jesus, let us take a nibble or two of Paleo Greek Salad. Word to the wise: add the dressing only just before enjoying, no matter if you are serving this family-style or for meal prep. The dressing with “sogg-i-fy” the veggies (and fruits). And hold off on dicing the avocado until just prior to serving. Otherwise, cut, dice, or slice your ingredients, and throw them in a bowl or lunchbox.

There is something about dried parsley and oregano paired with fresh garlic and lemon juice for a mouthwatering olive oil dressing. Also, to keep this salad recipe on the paleo side of things, I went with apple cider vinegar. Play around with that in your recipe, adding slowly until you have the flavor balance you want. And if you sample the dressing by itself and panic a little (or a lot), may I suggest dipping a forkful of salad into it first? I initially thought I had all the dressing ingredients out of whack, when in reality, they just taste best with the actual Paleo Greek Salad. Seems fair, and maybe a bit obvious. But if you’ve been following along, you know I get up in my own grill about homemade salad dressings.

And the dressings all come out the same. Delicious and best served with the actual greens or veggies or fruits or whatever you’re serving your dressings on. As for cheese, I skipped it this time. However, a few crumbled cashews on top would be a unique addition that still happens to be vegan and paleo.

Now, if you’ll excuse me, my salad and I have another Dr. Quinn episode to watch! 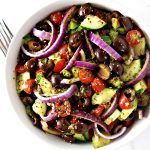