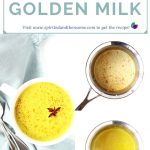 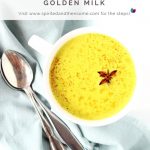 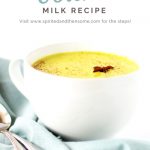 Vegan Golden Milk is a delicious turmeric milk recipe that tastes like chai tea! Flavored with fresh ginger, cinnamon sticks, and ground turmeric, it feels like a warm hug on a chilly day! {Vegan + Paleo}

Friends, golden milk was not what I thought it was when I first heard about it. I thought the term referred to breastmilk, aka “liquid gold”, and that people were putting breastmilk in their smoothies. I have nothing against that, but my lactating days are long since gone, and I wasn’t sure I’d be able to create a Vegan Golden Milk recipe for y’all to share in.

It turns out I was so so so wrong, and maybe you know that already. Vegan Golden Milk is not made with breastmilk. Instead, it’s made with turmeric, a spice whose color is, you guessed it, gold.

Thank you for coming to my TED Talk. And make sure to follow me for more recipes.

Thank God I dug deeper. Actually, thank God people on the Internet, like Dana from Minimalist Baker in her 5-Minute Vegan Golden Milk recipe, kept talking about it, or I would have missed the deliciousness entirely. AND THANK GOD I did finally take a leap and concoct a Vegan Golden Milk recipe of my own because, holy cow, that stuff is GOOD.

So what does Vegan Golden Milk taste like? It’s warm and comforting and sweet yet bitter. It reminds me of chai. And let me be candid here. The final product doesn’t taste like one would expect. For example, this Vegan Golden Milk recipe includes coconut but doesn’t taste coconut-y. It also includes turmeric but doesn’t taste excessively bitter. I love fresh ginger, but a little goes a long way. That isn’t a problem here. In fact, I leave the fresh ginger rounds in the golden milk leftovers to infuse the drink even more. And although you can add a splash of vanilla, you don’t need to. So it’s optional on the ingredient list.

Friends, I cannot stress this enough – if you like chai, latte-style drinks, you must put this Vegan Golden Milk in your life. Still on the fence? Let me put it this way: if a warm hug on a frenzied day had a flavor, this would be it.

What is Golden Milk?

So what is golden milk, exactly? According to Beejoli Shah, in her Bon Appétit article, Golden Milk: Separating Fact, Fiction, and Lies My Mother Told Me About Turmeric, golden milk is “…a frothy, creamy, and incredibly Westernized variant on traditional Indian haldi doodh, or turmeric milk…” While the traditional drink often includes just milk or water, plus honey, the extra ingredients that sweeten it up are Western additions. So the version you see today, with cinnamon, ginger, almond milk, and coconut milk, are definitely a Westernized version of a traditional Indian drink.

Much has been touted about the health benefits of turmeric but there are also questions about preparation, absorption, and ongoing use. I’m not qualified to address any of those issues. However, if you’re curious to learn more, then check out Dawn MacKeen’s New York Times article, What Are the Benefits of Turmeric? The bottom line? Health benefits or not, turmeric is a delicious addition to several foods and beverages.

This golden milk recipe is

There are several additions you can include in your Vegan Golden Milk. Until you know exactly how you want to prepare your version, I suggest adding ingredients in small amounts and taste test as you go.

Want another hug? Here are more comforting beverages that feel like a warm embrace on chilly days! 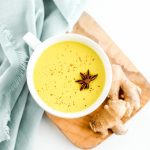 Vegan Golden Milk is a delicious turmeric milk recipe that tastes like chai tea! Flavored with fresh ginger, cinnamon sticks, and ground turmeric, it feels like a warm hug on a chilly day! {Vegan + Paleo}