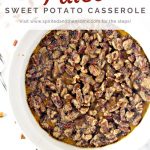 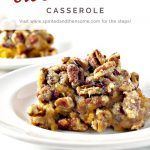 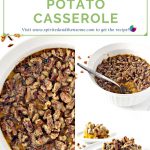 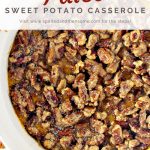 Cinnamon, nutmeg, and allspice take the taste up a notch in this Paleo Sweet Potato Casserole recipe, while the roasted pecans epitomize the holiday season. This delicious side dish also happens to be gluten-free, grain-free, dairy-free, and soy-free, too! 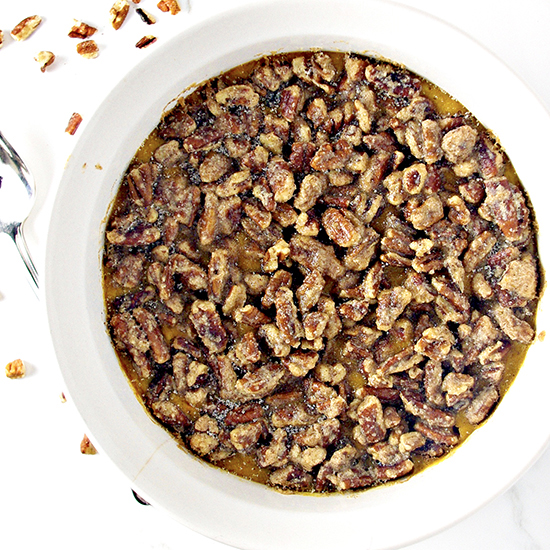 Paleo Sweet Potato Casserole is a family staple during the holidays. Twinkle, who was about four years old when I first made it, shouted, “Blech! It tastes so GOOD, Mama!!” Since she went back for seconds and then proceeded to ask for another batch the next day, I feel it is safe to say the recipe was a hit. K-Hubs declared it a new family tradition, while Toodle didn’t mind it when she took a bite. “Mom, it’s so…interesting.” Coming from our discerning first born, that is a stellar review, and I’m all too happy to take it.

I don’t normally go nuts over sweet potatoes, but I love them here (I also love them in Maple Bacon Sweet Potatoes). So when I decided to embark on a paleo Thanksgiving side dish recipe, I knew it had to be one everyone could enjoy. Paleo Sweet Potato Casserole is that recipe.

K-Hubs says it tastes like a cross between pumpkin pie and pecan pie. I don’t like pumpkin pie or pecan pie (Toodle and I are the “discerning” members of the family). But, I do like this recipe. In fact, I heart it in a big way. The roasted maple cinnamon pecan topping is reminiscent of the aroma of roasted nuts sold at the craft bazaars Mom, The Gram, and I used to frequent every fall when I was a child. Some people patron a favorite bar or two. The three of us patroned our favorite craft shows. Nothing says need-based purchase like a 1980s mauve and country blue floral arrangement (or fuchsia and teal if you happen to shop about a decade later). 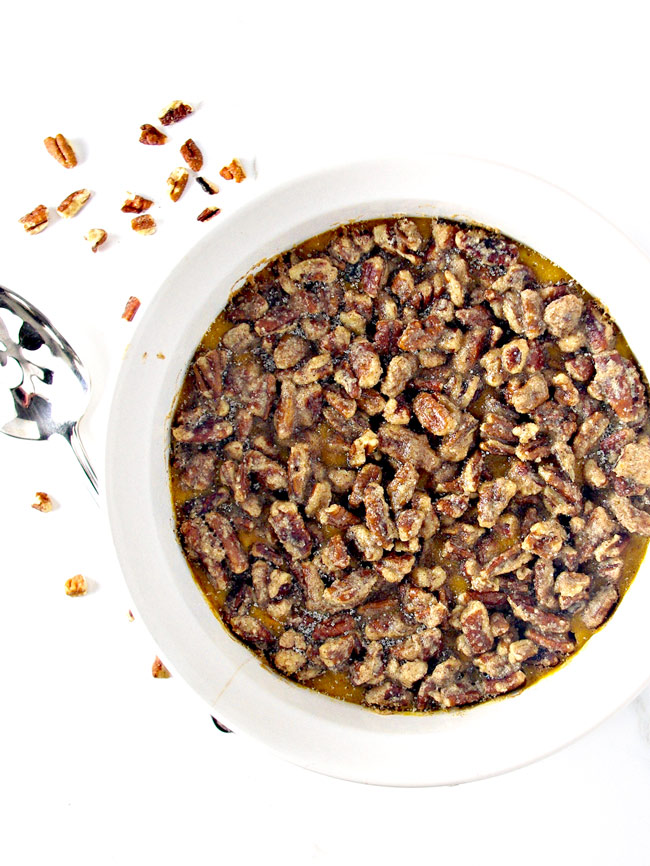 If Mom had had a prayer for everyone, it would have been, “May your apartment be small and your Christmas tree large.” I think her holiday advice would have been, “Maybe just stream the crazy in small portions when possible, drink a little when everyone IS looking (because what do you care what they think), and treat yourself to the couch and a bag of chips when the family event is over.”

As for Paleo Sweet Potato Casserole, Twinkle and I spent a full five minutes just smelling it. No craft show roasted nuts needed. But if time travel were possible, this recipe would be the portal. I seriously go back about 25 years every time I take a bite. The smell is as intoxicating as the flavor is out of this world. Paleo Sweet Potato Casserole is a filling, comforting paleo recipe.

So how do you go about making it? As side dishes go, it’s quite easy to prepare. 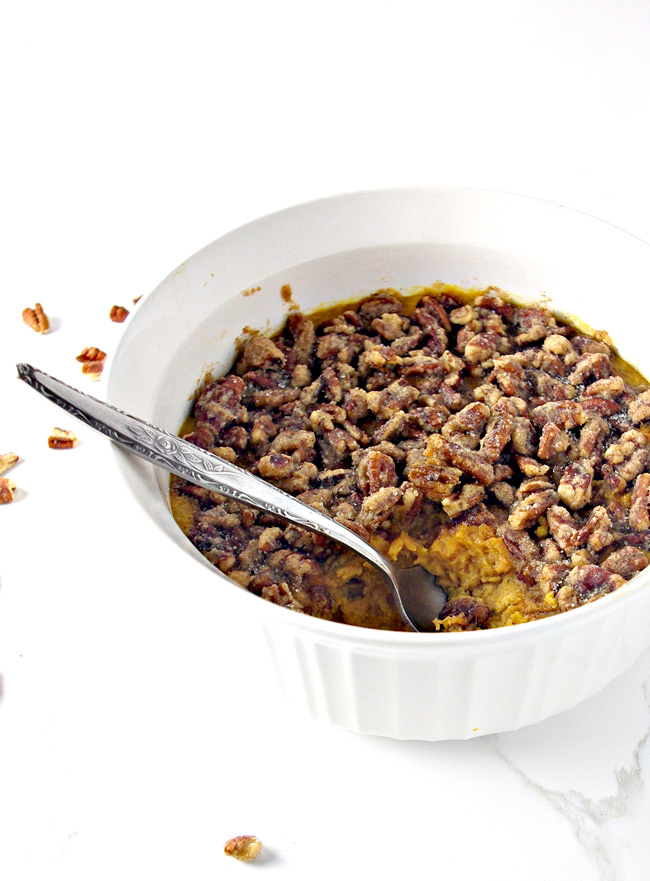 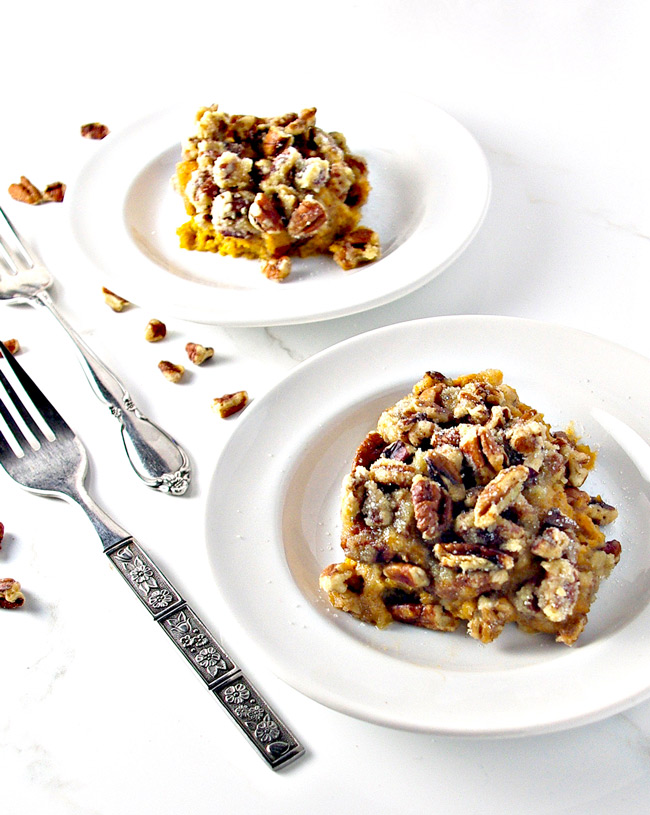 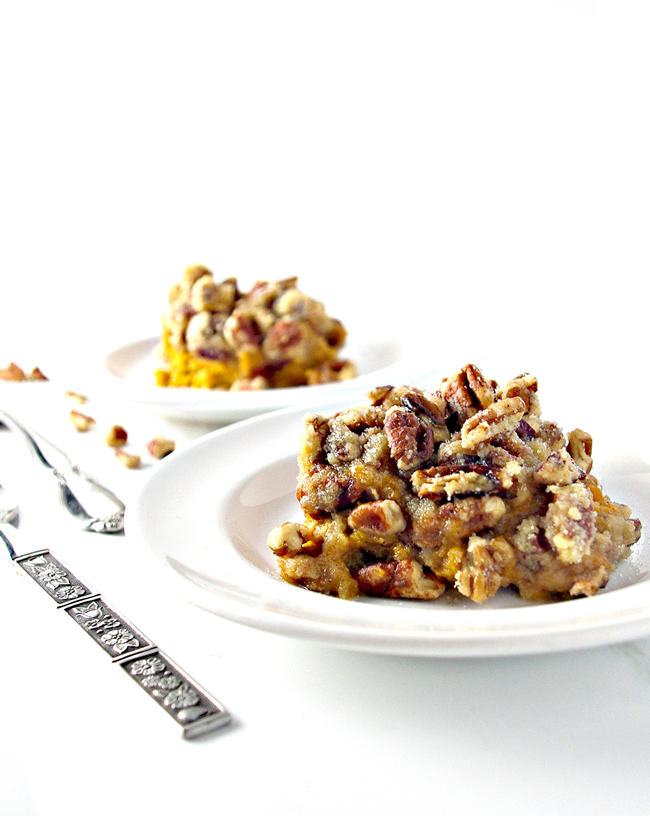 From there, serve and enjoy! It’s that easy to make. Paleo Sweet Potato Casserole is the perfect blend of creamy fillings and crunchy toppings, especially for the holidays but also if you can’t make it to a craft bazaar and miss the smell of the roasted nuts cart always placed in an easily-accessible corner of the building. 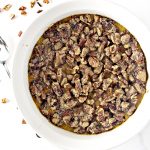