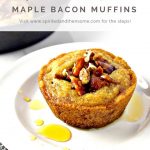 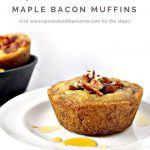 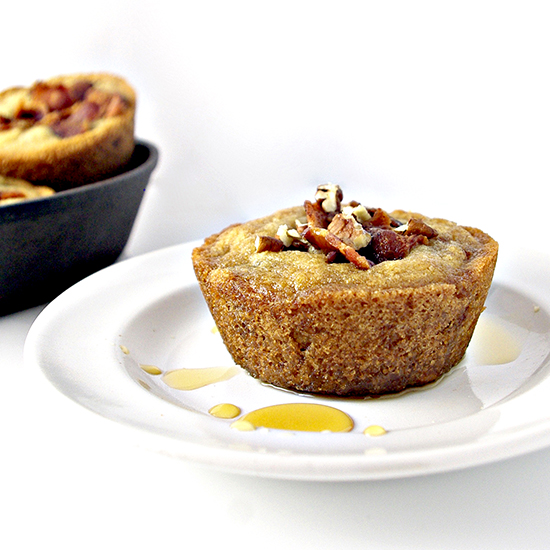 Texas-Style Maple Bacon Muffins. A rather long recipe name that’s worth every word. Approximately nine months in the making, these muffins have been a labor of love. Research, research, and more research. Would it be possible to make a paleo-friendly maple bacon muffin recipe that would be gluten-free, dairy-free, soy-free, and grain-free? Sure. And also doesn’t taste like finely ground cardboard and faded dreams? Definitely. Probably. No, wait. Definitely. Where there’s bacon, there’s a way. This is happening.

But not without a little elbow grease. Or, in this case, a little bacon grease. I would literally make a batch, fail, walk away, and eat the leftovers (if the other three didn’t beat me to it). The failures were never about flavor because bacon will never let you down. However, getting a workable consistency that met the above criteria proved to be considerably more difficult. However, on the plus side I now have inspiration for a maple bacon pull-apart bread recipe. 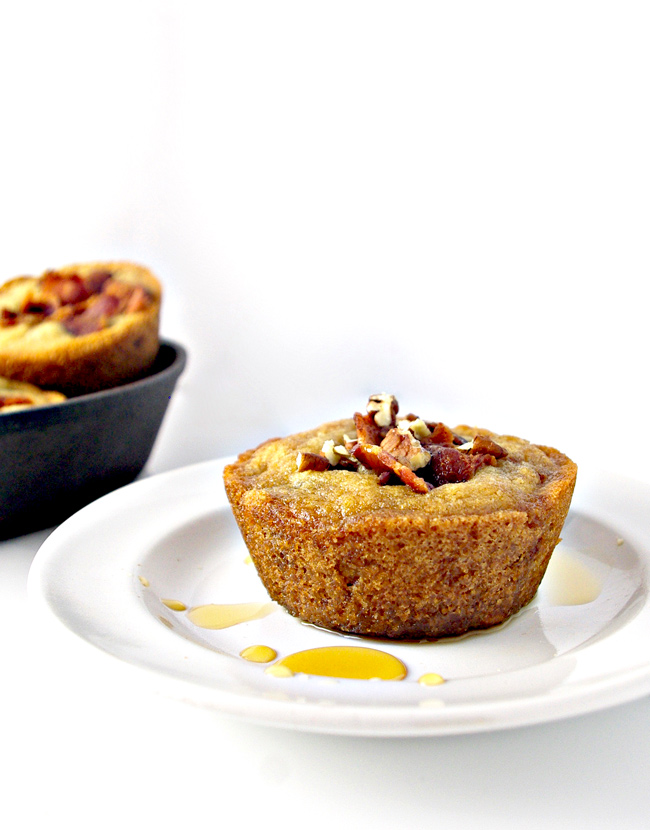 Time and again, I ate the delicious rejects in a cloud of smoky haze with an aroma of bacon still lingering long after the stove had been turned off. With each soul-satisfying bite, I’d start to think about what to try next. Inevitably, other recipes came to fruition first, and life went on as usual. Then out of the blue, I’d think, “I’m ready to fail again,” and off to the kitchen I’d go.

Now, Spiriteds, we have Texas-Style Maple Bacon Muffins, and they are paleo-friendly. Oddly enough, the final recipe ended up being the simplest version of everything I tried. It closely resembles the Spirited recipe for Baked Vanilla Paleo Donuts. I learned a valuable lesson during these nine months. Get out of bacon’s way, and let it do it’s thing. 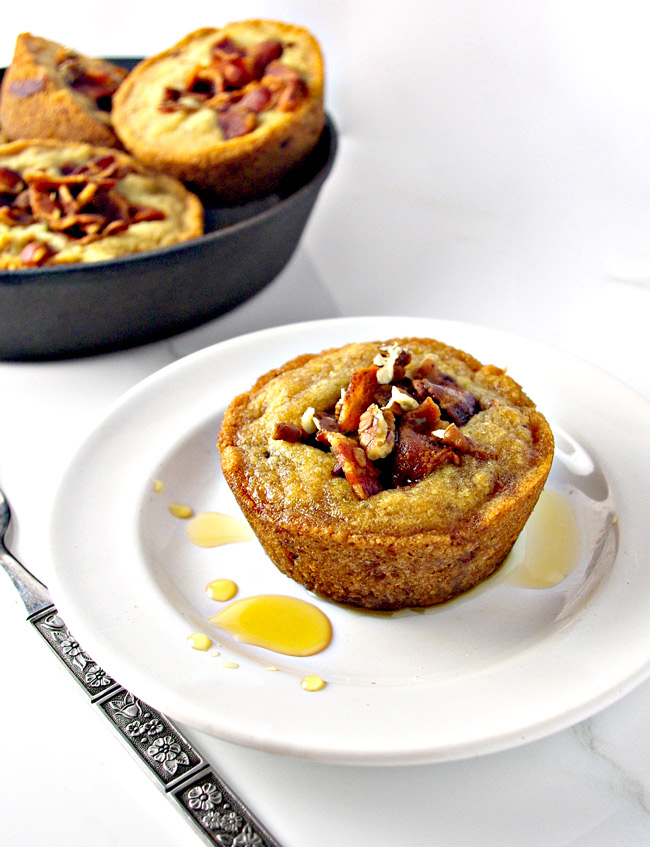 Any recipe that reaches peak performance with two pounds of bacon and half a cup of bacon fat is a recipe I want to get to know. I mean, everyone needs their guilty pleasures. We may have a lot of restrictions on our diet, but we are allowed hard liquor and pork. Also chocolate. These seem like fair tradeoffs. So, yes, I ultimately went a little nuts on the bacon.

If your cardiovascular system or budget melts down at the thought of two pounds of bacon, then rest assured you can use just one pound, and your Texas-Style Maple Bacon Muffins will turn out fine. The second package of bacon adds extra crunch and intensifies the flavor. However, even without it, the overall essence will remain delightfully the same. I’ve made this recipe both ways, and, honestly, bacon is bacon. You can’t go wrong. 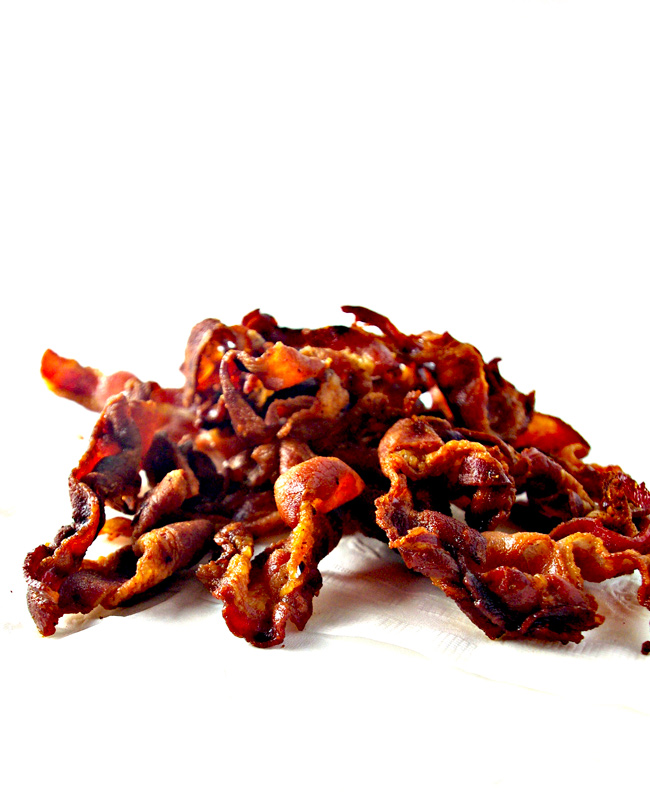 When I make these muffins I start with the main attraction, the bacon. I fry the strips to crispy perfection and sandwich them between napkins for easier crumbling later. Thanks to Auntie’s forewarnings about reputations, used cars, and family reunions, I can never “recommend” anything. However, I can “highly suggest” you aim for crispy bacon in this recipe. Chewy bacon and Texas-Style Maple Bacon Muffins don’t quite mesh. I worried the bacon would burn during the baking process. Alas, all was well. The bacon comes out of the oven almost exactly the way it goes in. Frying and baking aside, bacon is pretty sturdy, and I kind of love that about it.

After frying the bacon and while it is cooling, I leave the grease in the pan and go to work on the muffin batter. This process isn’t too tricky and moves along fairly quickly. You could cut down on prep time by trying to make the batter while the bacon is frying. I don’t always multitask well when in the presence of bacon, and we are dealing with egg whites, which feels a little tenuous. But it’s always worth a try. 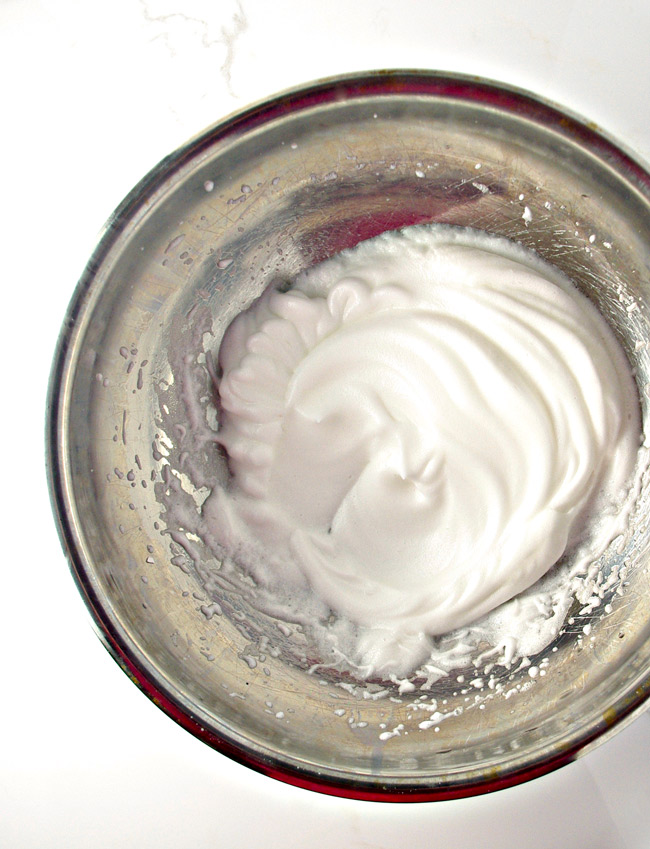 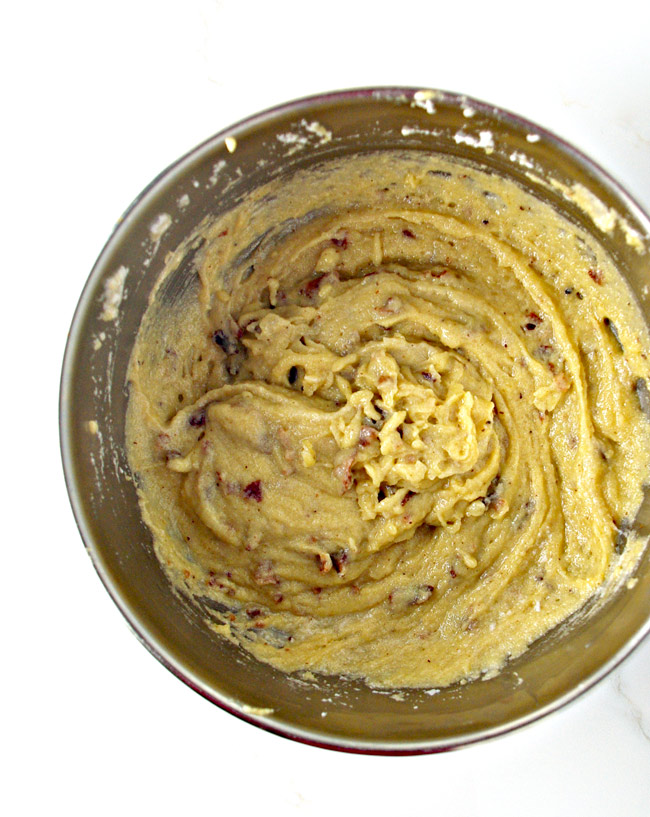 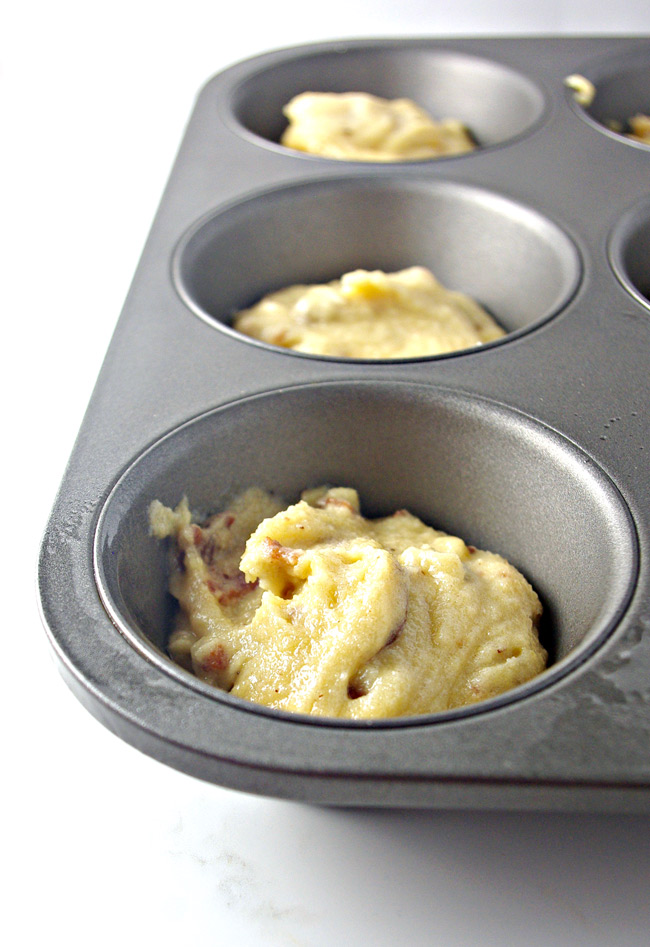 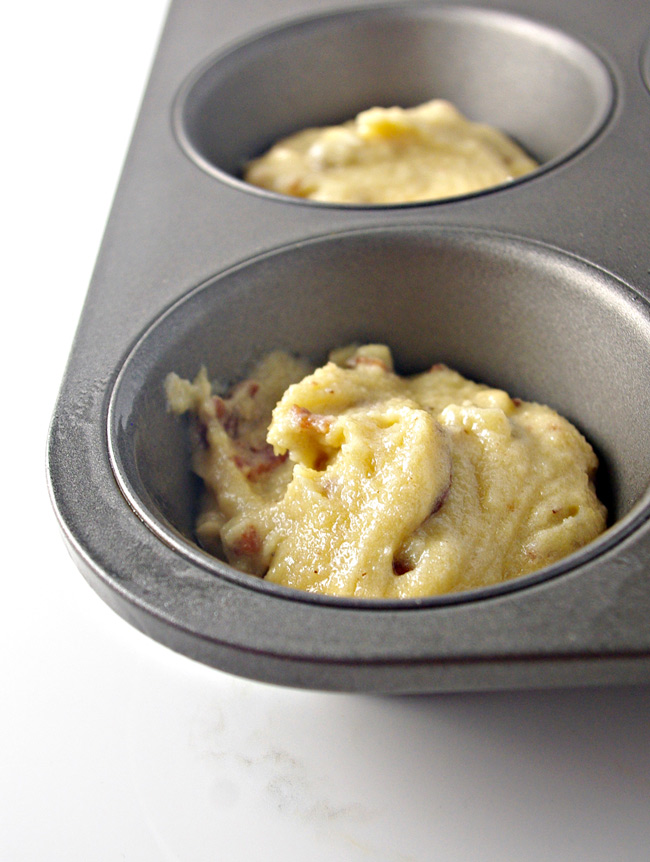 For the batter, I add dry ingredients first, followed by wet ingredients, and finally the crumbly bacon pieces. If you’d like to top your muffins with bacon pieces, then set aside about 1/3 cup. You can add them just prior to or just after baking.

And, of course, because these are Texas-style muffins, you may be wondering about silverware. I mean, sure, you can totally use a fork. But who am I kidding? I never do this. Polite company is overrated, and I just go face first into my meal. I’d also eat every meal standing, and if I could just snack for a living, I totally would. Let’s just say forks come down to personal preference. 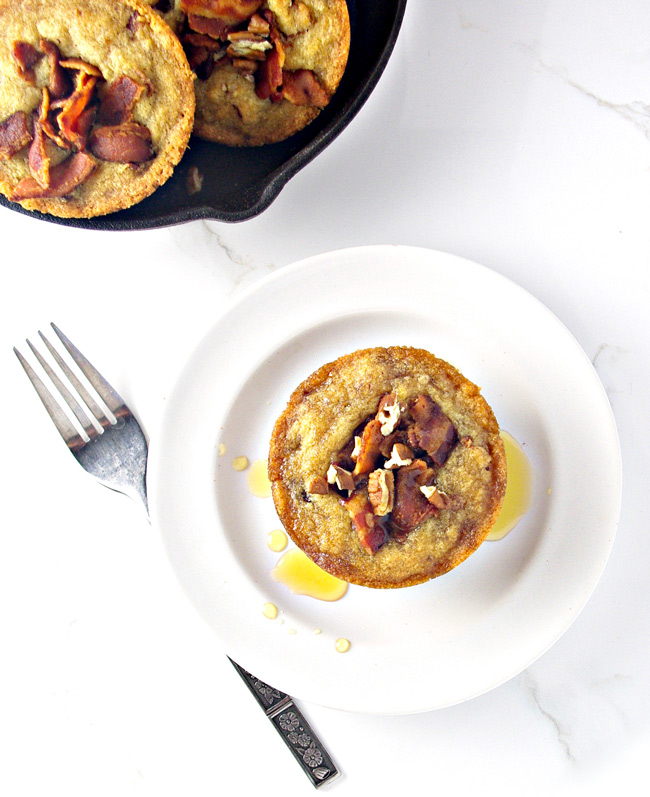 What was the family verdict after so many attempts? Honestly, I think the other three are a little sad I’m not still making countless batches for research purposes, no quotation marks needed. K-Hubs proclaimed them the perfect balance of sweet and salty. The real test came when Toodle and Twinkle, my brutally honest quality control specialists, took their first bites. Toodle told me they were all she could think about. And when no one was looking, Twinkle pulled a chair up to the counter and ate the leftovers. That’s m’girl! So I guess it’s fair to say Texas-Style Maple Bacon Muffins don’t taste like finely ground cardboard or faded dreams. They are, however, rather addicting. 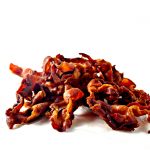 To make this recipe as paleo-friendly as possible, look for bacon that is labeled paleo or is minimally processed, all-natural, and with as few added ingredients as possible. Many brands label their packaging as such, but it still requires a close look at individual ingredients to make sure.