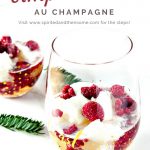 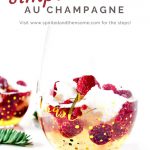 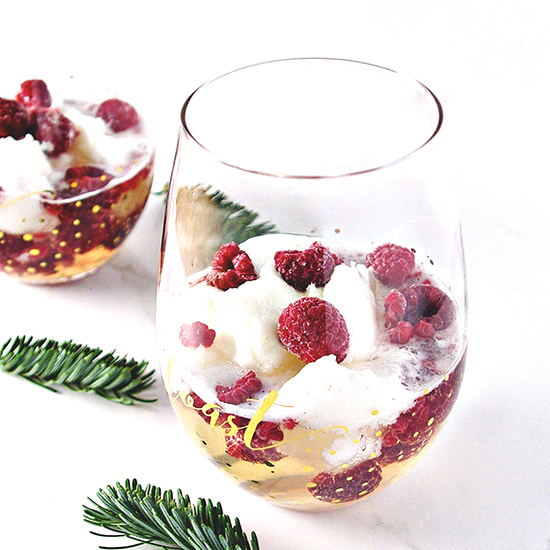 Two things. First, Happy New Year to you, Spiriteds! And, second, Mom was obsessed with the Kennedys. What do these two things have in common? Only just today’s amazing, eye-candy-of-a-drink recipe, Simple Sorbet au Champagne. It’s gorgeous, it has been simplified, and if you are looking for a last-minute New Year’s Eve recipe or a creative way to use a bottle of champagne, then wet the fire and call in the dogs because the search is over.

Mom’s obsession with the Kennedys permeated my life. What started out as a scrapbooking project she began in high school morphed into owning every biography about them, taping every documentary on TV, and finally passing the obsession onto me. My love for the family is more fascination than obsession. But when I found In Kennedy Style: Magical Evenings in the Kennedy White House by Letitia Baldrige, I couldn’t pass it up. A book that normally retails for $29.95 on sale for $4.99 in the bargain bin at Border’s Bookstore? Don’t mind if I do. I was in high school, probably had economics under my belt, and knew a good deal when I saw it. Also, doesn’t every high schooler want an elaborate book about the Kennedy’s? Obviously the only answer is yes. 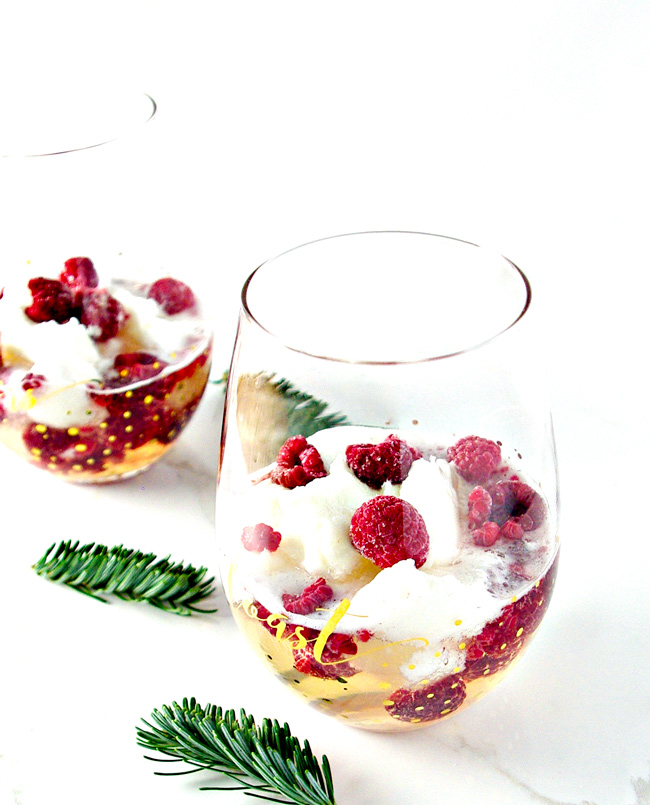 And, so, in my own right I am the proud owner of a book about the Kennedys. You’ll be surprised to learn the book sat on my shelf, untouched, for several years. I thought about clearing it out each time I moved somewhere new. But, fortunately, it always made the cut. Included are pictures, pictures, and more pictures, not to mention menus and recipes prepared by Chef René Verdon.

And one of those recipes is, you guessed it, Sorbet au Champagne. It was originally prepared on Monday, November 13, 1961, the night Pablo Casals played at the White House. Can you even imagine? Also, how does one pronounce “au”? Is is “oh” or “ow” or “ah”? No one really knows for sure. #YesIBetTheyDoKnow. I studied German for six and a half years, so au would sound like gerferfliegenflugenmachen. So, basically, the same thing.

I eventually did pull the book from the shelf and hosted a Jackie O night with girlfriends, long before K-Hubs and I had children. And, yes, Sorbet au Champagne was on the menu. 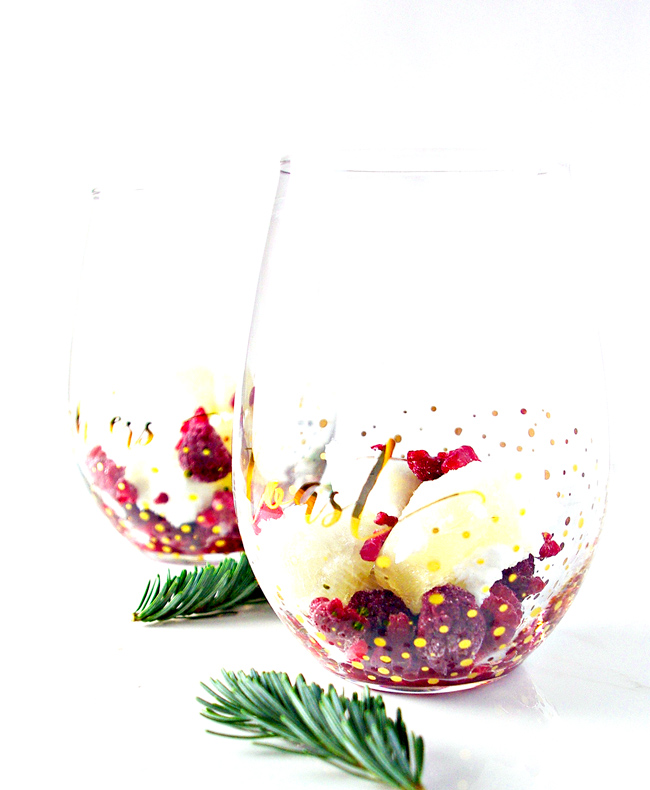 What makes this recipe so simple? Unlike the original, which calls for a homemade simple syrup, I skipped that process altogether and experimented with honey and agave nectar instead. This made Simple Sorbet au Champagne a no-cook recipe. Again, be still, my heart.

Both honey and agave nectar are more viscous than a traditional simple syrup. So getting the ingredients to blend together was a challenge. I found agave nectar works best, although honey will do if you have an electric mixer with a high-speed setting and can mix everything, including the whipped egg white, rather quickly. 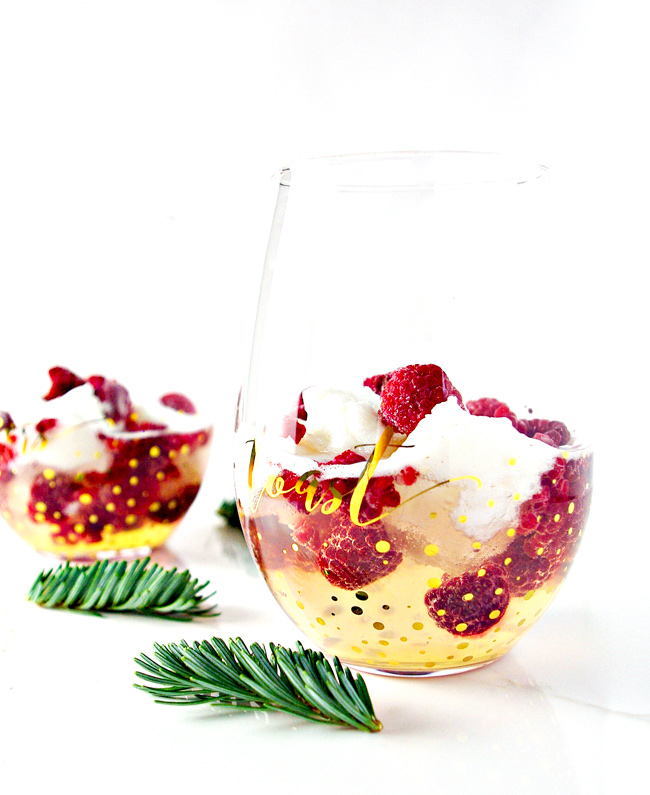 Today’s Simple Sorbet au Champagne takes just a matter of minutes to make, is gluten-free and granulated sugar-free, and is absolutely DELICIOUS. It’s also rather pretty, and there are a few ways you can serve it.

Verdon’s original recipe calls for you to pour your mixture into an ice cream machine or metal pan and cover and freeze it for about two hours. Then you remove the mixture from the freezer, let it soften enough to break into chunks, and serve it in chilled champagne glasses.

I don’t own an ice cream machine, and I don’t have a shallow metal pan the right size. So I went an even easier route and poured my Simple Sorbet au Champagne into ice cube trays. Since alcohol has a higher freezing point and I used plastic trays rather than a metal pan or ice cream machine, my mixture firmed but didn’t freeze. This meant, however, I didn’t need to wait the 10 minutes for softening. I simply popped the cubes out of the tray, and as I have always done with this recipe, plopped them in glasses and poured more champagne on top. Because clearly the recipe doesn’t already contain enough champagne on its own. #YesItDoes. This time I included frozen raspberries for color and festive cheer, but that is totally optional. 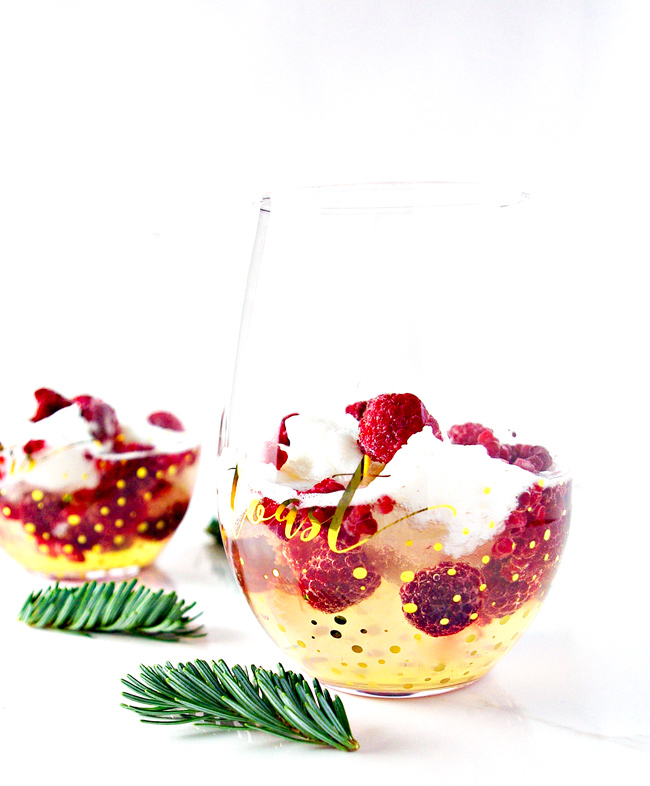 So, if you are in the mood for a high-class but totally simple recipe to ring in the New Year, then head into the kitchen and make your own Simple Sorbet au Champagne! Happy New Year, Spiriteds!! 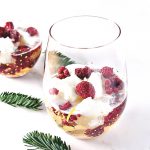 If you plan to pour more champagne over your Simple Sorbet au Champagne, I high suggest buying a second bottle of champagne for just that purpose.