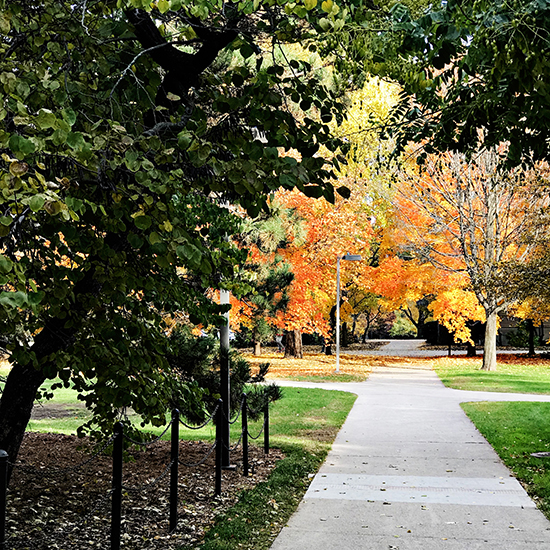 Happy Monday, all! October is almost over, and we have the gorgeous falling leaves to prove it. Also, in spite of the beautiful leaves, I admit I’m a little sad to see October go. It was a whirlwind month, and just why do things have to come to an end anyway? Because they do, Morgan. Fine, fine. But I go into November already nostalgic. Like, could we invent a tweener month, perhaps Novtober? That could work, right? Octember? That’s not weird at all, correct?

Anyway, we are currently covered in Halloween costumes. So far, we’re Jack Skellington from A Nightmare Before Christmas and a baby unicorn (for now ~ Twinkle’s choices change by the minute). And, fingers crossed, I can get a photo or two of the girls that isn’t a whirling blur. Or one that is just a partial whirling blur. Probably I’ll just take what I can get. What are you doing for Halloween? What will you be sipping on or dining on? Grab a snack and settle in. Let’s chitter chatter about our latest and greatest.

So it only just happened a few days ago on the blog, but we are legit IN LOVE with this Homemade Vegetable Broth. K-Hubs threw it in our sauté pan last night with sautéed chicken, vegetables, and herbs, and I died and went to heaven, it was that good. You know how sometimes you eat something that just hits the spot? This was that meal, and I’m working a recipe to put on the blog so we can share this deliciousness with you.

I have to laugh because in last month’s Side Notes & Shenanigans, I wrote about our summer travels. And this month I have more travels to write about, one location of which is a revist. But here’s the thing, we have two kids. We don’t travel that much, unless you count trips to Aldi. However, lately we have been getting out more. Not far, necessarily, but certainly out of the house and for more than just extra celery. This is new territory for us that I suspect is the result of our girls getting older. I kind of want to travel back in time to my young mom self to say, “Chin up, younger Morgan. You’re knee-deep in diapers and bottles and public tantrums (sometimes also the kids are crying, too). But hang tight, because brighter days are ahead.”

So our trips ended up being Iowa City, again, and Ames. And both were a blast.

What can I even say about this? K-Hubs played sousaphone in Hawkeye Marching Band, and University of Iowa homecoming always holds a place in our hearts (even mine, and I’m a Cyclone). So although we went to Iowa City over the summer for RAGBRAI, we went right back for Homecoming. Yes, those are our girls playing instruments that absolutely do not belong to them. But, that’s also why we love our friends. Because they have more chill with our children than we do, and it takes a village to raise a few kids. 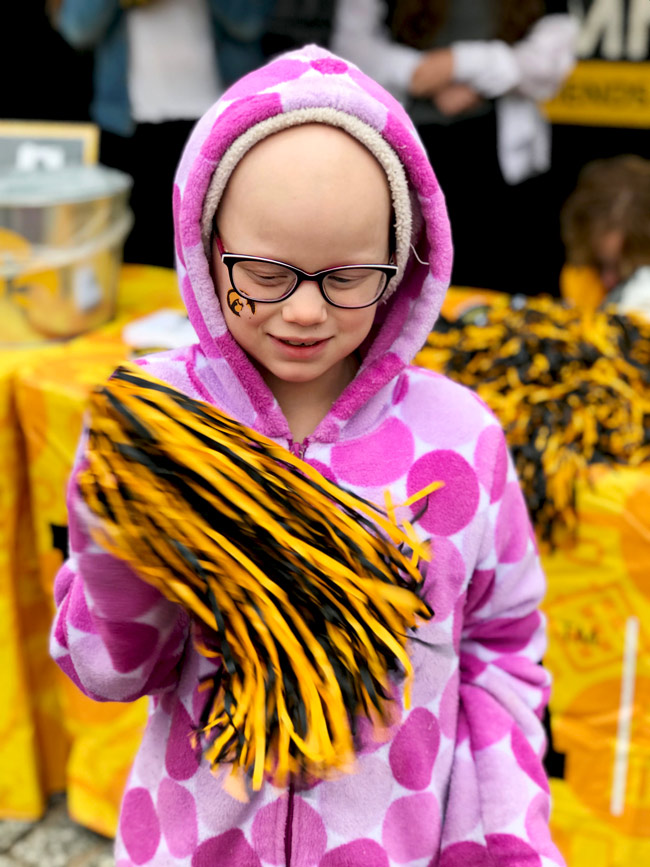 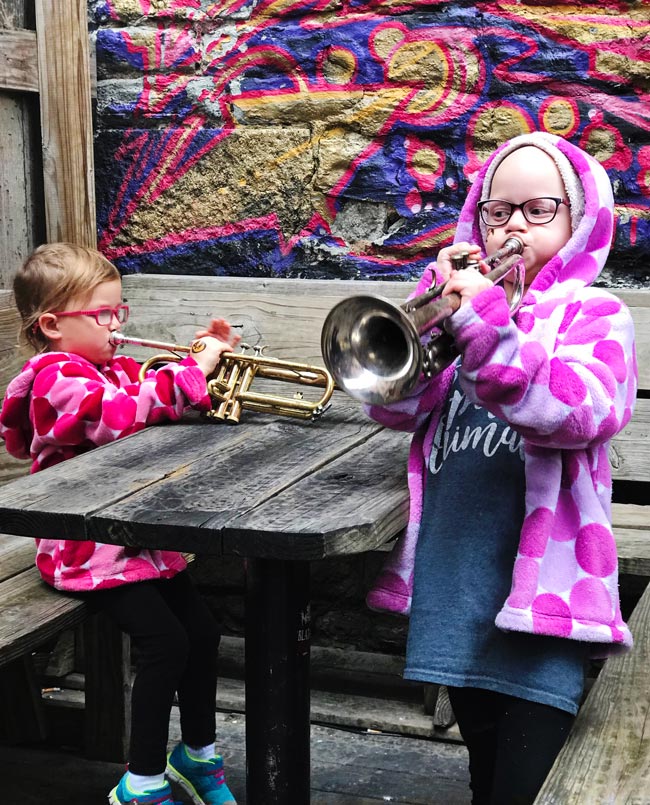 So, we turned the experience into a long weekend. K-Hubs marched in the parade on Friday and the field on Saturday before the game started. We also slurped on gluten-free, dairy-free smoothies at the Power Cafe on campus, visited the Old Capitol Museum, and made our way back to the Museum of Natural History. One thing I didn’t do was grab a picture of K-Hubs this year performing in pregame festivities. So here’s a picture from last year. And where is he, exactly? See that guy in the front bending down on one knee with his bright white sousaphone nearly touching the ground? Well, that’s K-Hubs. He arrived late, missed his spot, colored outside the proverbial lines, and stood right in front. I managed to get both photos and video of the whole thing. Best late arrival ever. 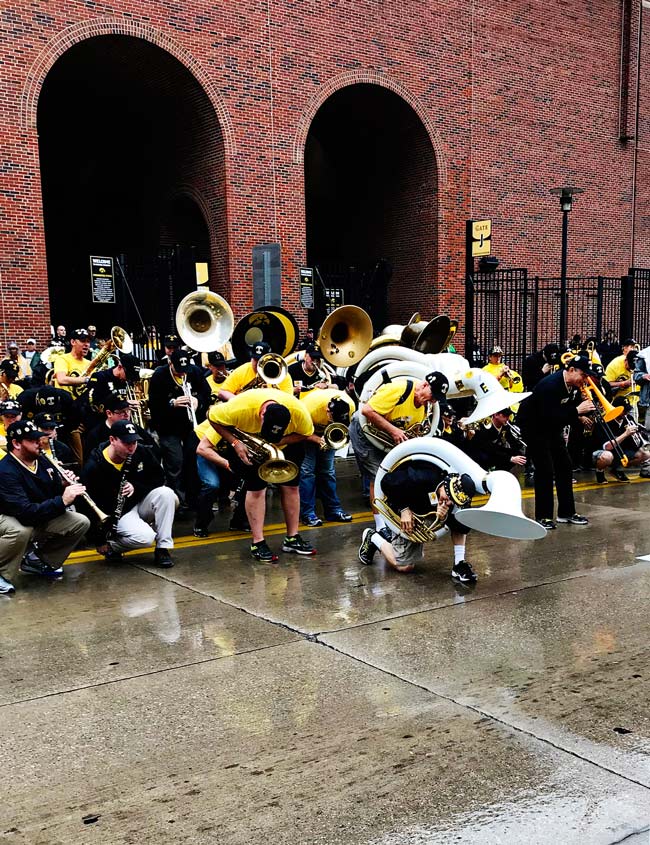 Then we trekked to Ames for Iowa State University’s homecoming. Did I play the sousaphone in college, too? No. I didn’t even play an instrument. But I did help organize the Margaret Sloss Women’s Center library. And if you were to decipher our respective college experiences, sousaphone and women’s center might be the only two things you would need to know about me and K-Hubs to know the answers. 😂 😂 😂 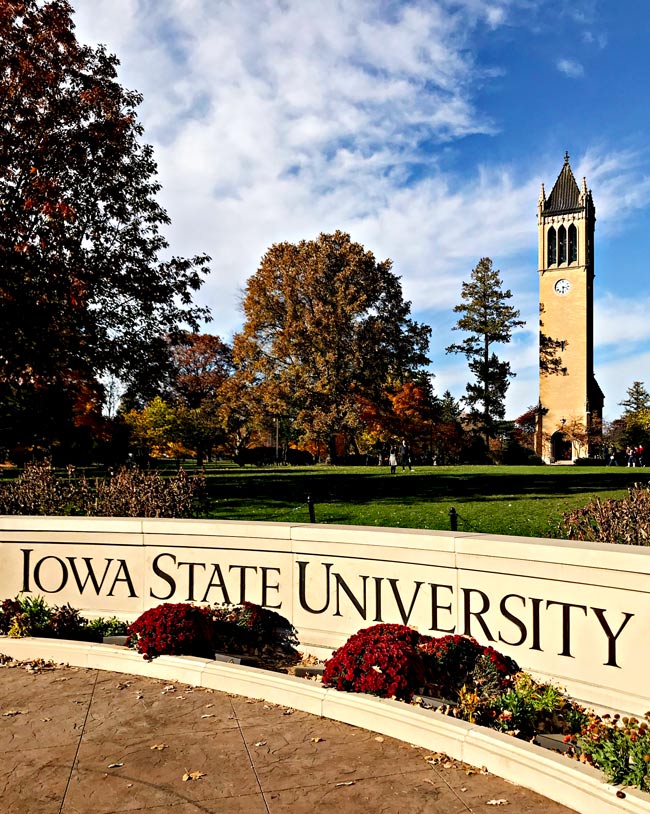 There is so much to love about ISU (and the University of Iowa, if you’re into that kind of thing 😉). But can we please drool over these stunning leaves? Ames really does look like this in the fall. And I love every stinking minute of it. Also, please imagine Cylcone fans’ joy when ISU made it onto Buzzfeed’s list, 25 of the Most Beautiful College Campuses in the World. It was honestly like we had collectively won the lottery or something. 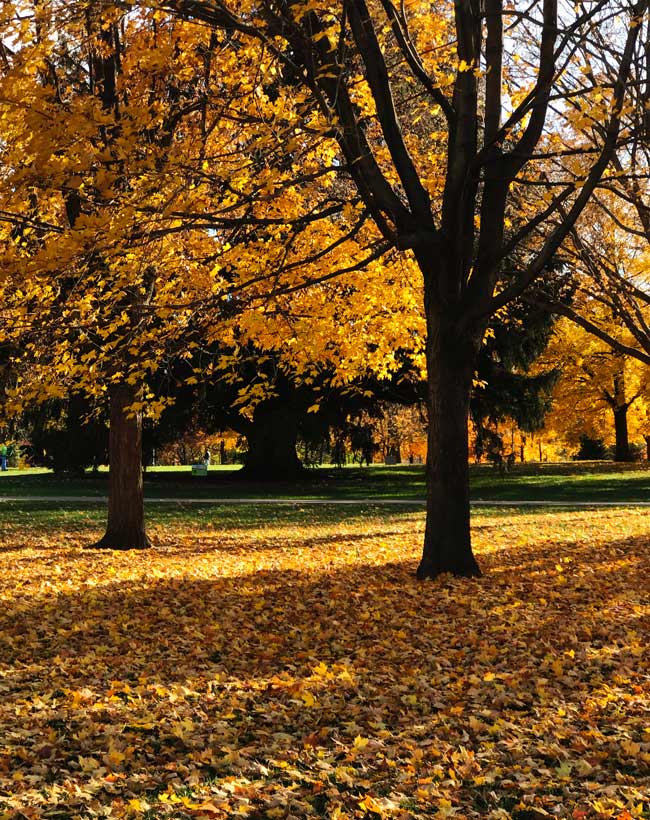 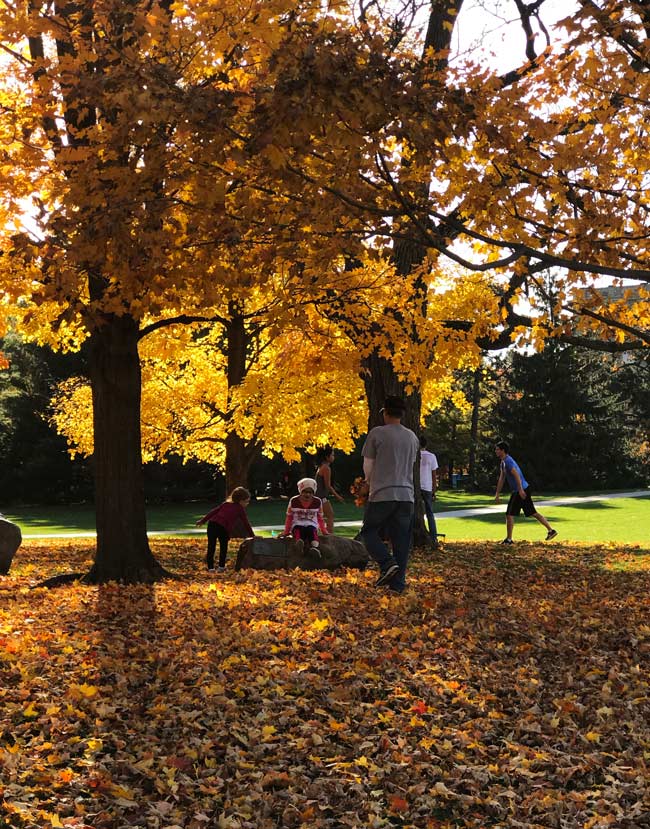 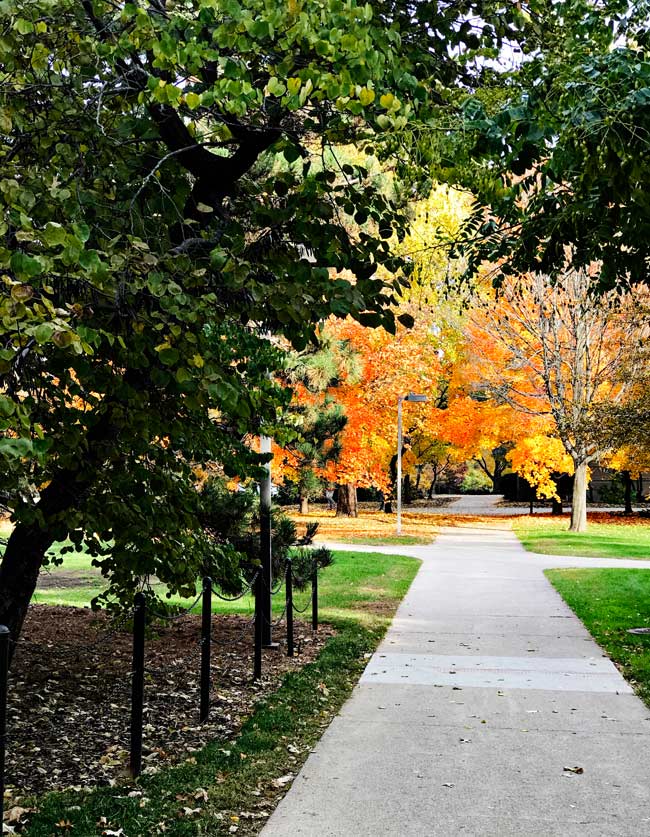 I showed K-Hubs and the girls around Lake LaVerne, and fortunately, our resident swans, Lancelot and Elaine, were out and about, too! How many Lancelots and Elaines have there been over the years? I, um, don’t know and sort of skipped over that part with the girls. 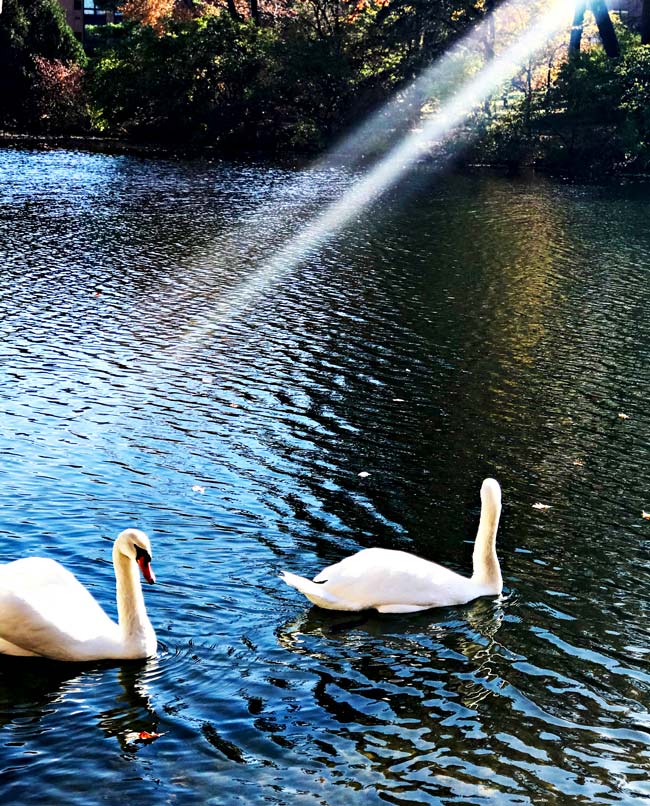 Then we hit up the Anderson Sculpture Garden on campus. And I have a confession to make: that garden has been there forever, and while I walked by it nearly every day, I never knew it was an actual thing. But this might not come as a surprise given that I have another confession.

Aside from maybe a few buildings, I never bothered to memorize the building names on campus. K-Hubs was incredulous upon learning this fact. But it’s true. My classes were all over the place, and I never seemed to have a class in a building more than once (or so it felt), so I memorized enough to get from Point A to Point B and called it good. By the next semester, I’d forgotten the buildings’ names, learned new names, and went about my best life. Whatever, I graduated. I got it done! I’m also a horrible tour guide (oh, and I was a new-student tour guide while I was there, but managed never to get any of my students lost). Go with God. This is my best self. 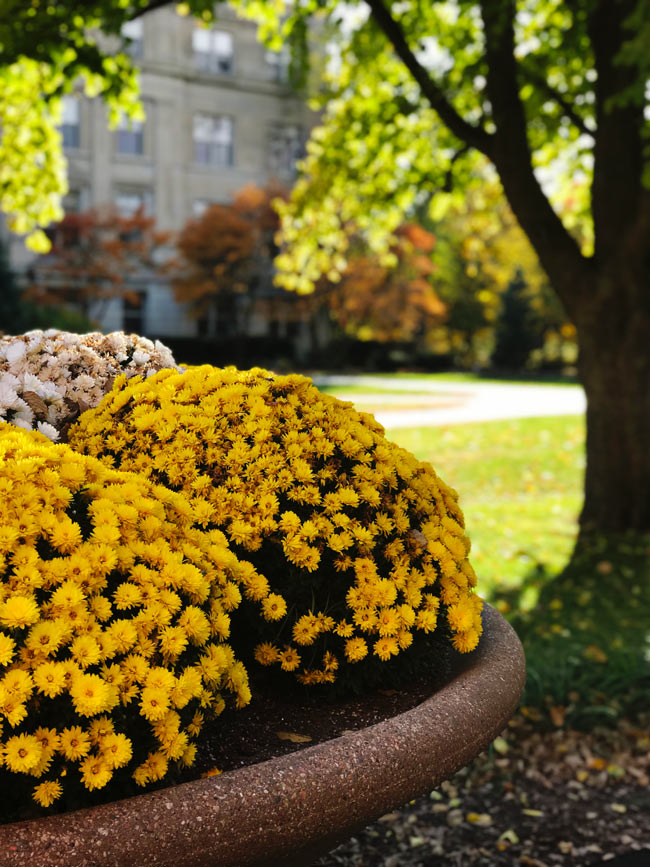 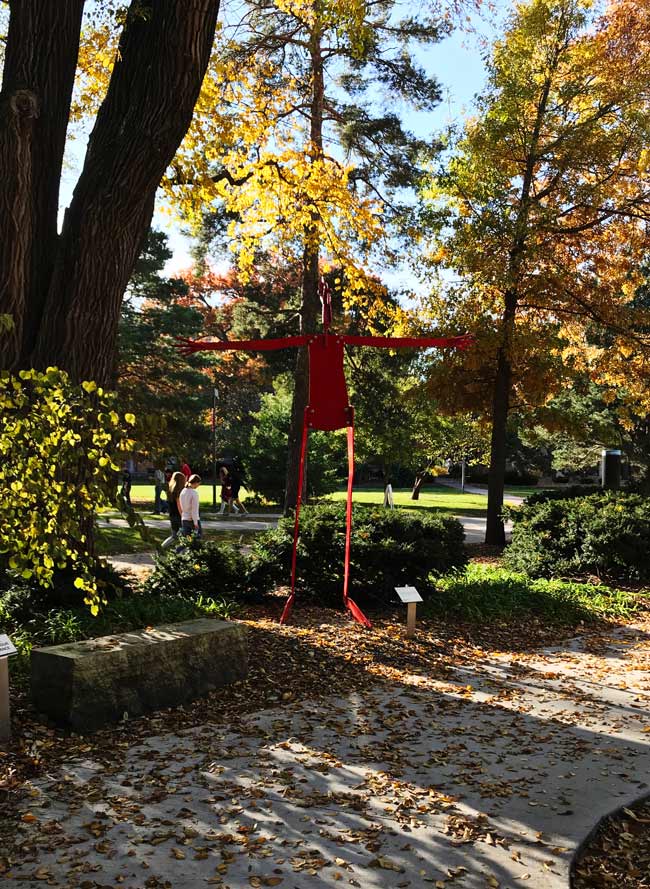 Then we hit up the Parks Library (I DO know where that is!). And it is one of my favorite places on campus. It’s old meets new. And if you search far and wide enough, you’ll discovery nooks and crannies with art installations and murals, including those of Grant Wood and Doug Shelton. Even K-Hubs admitted the Parks Library is nothing short of impressive. Toodle thought parts of it looked like something straight out of Hogwarts. I tend to agree. Remember when Neville lost and then found his toad, Trevor, and Professor McGonagall was on the staircase tapping her fingers? I’m convinced this was that staircase. Not really, but…. 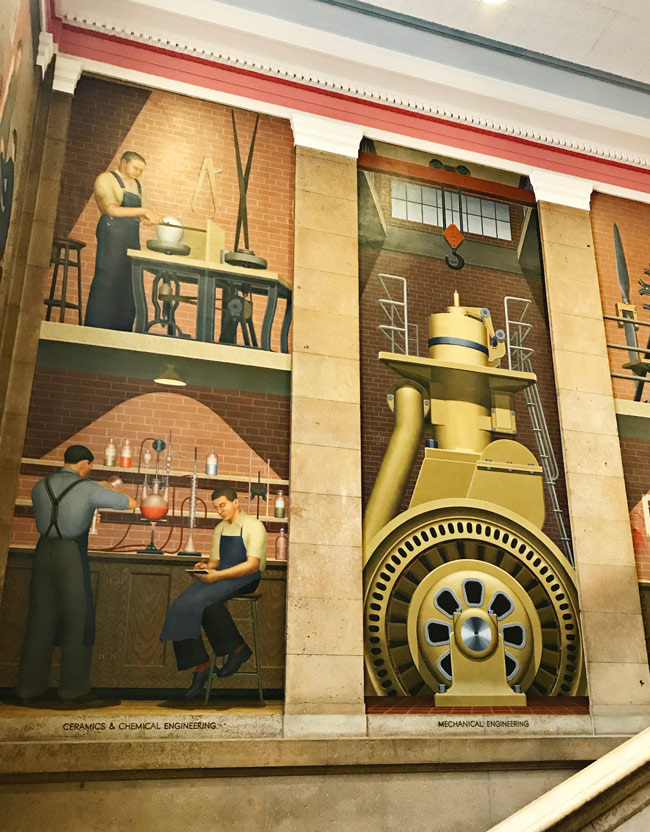 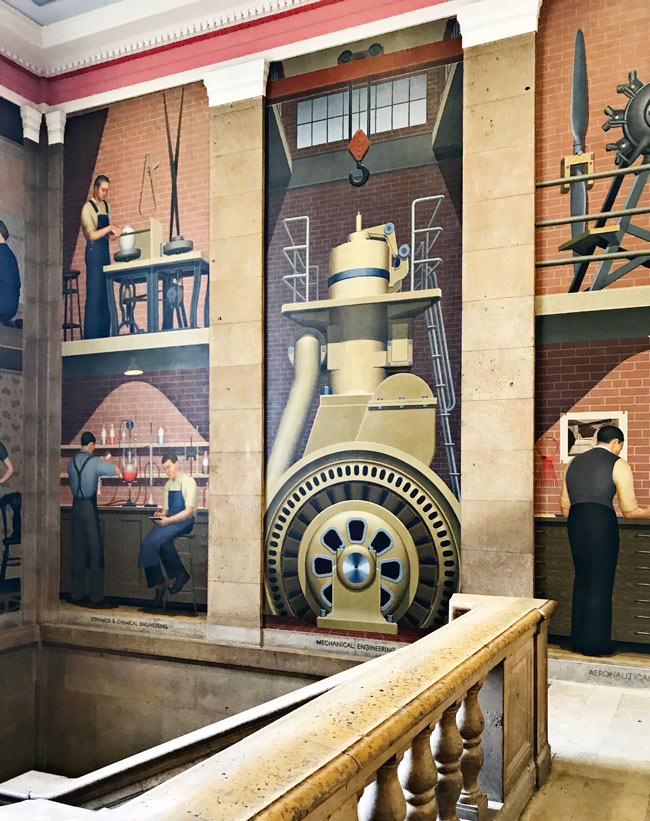 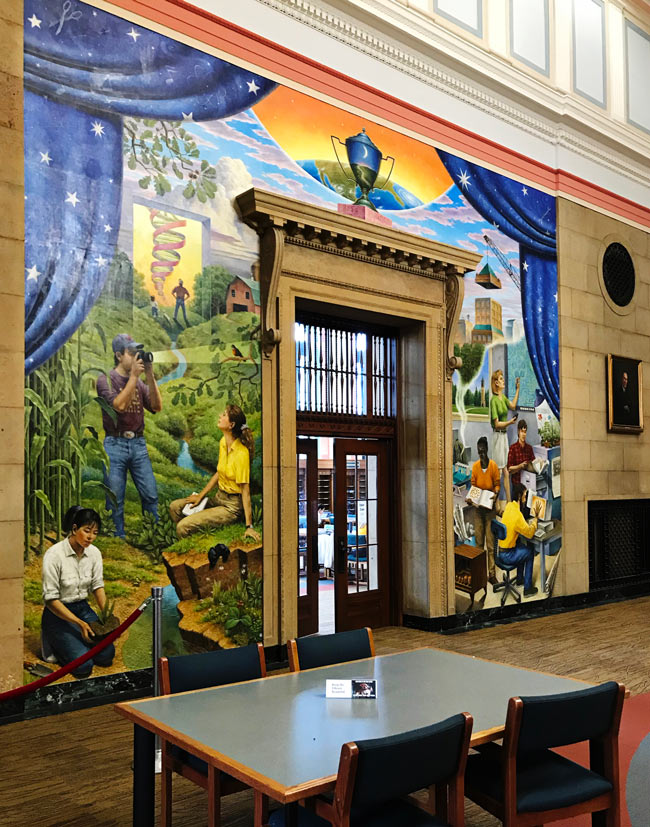 And if you’re in the mood to play a game of checkers or chess with oversized pieces (again with Hogwarts vibe, maybe?), then walk right into the library and sit right down because you’re in luck! 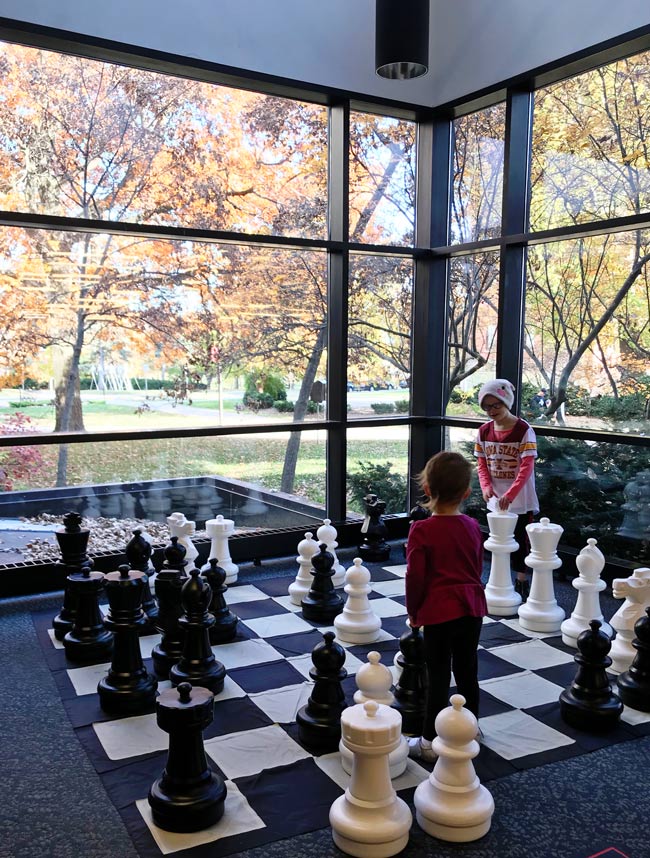 Then we settled down for a delicious, mouthwatering dinner at Hickory Park. Gluten-free options, comfort foods galore, and basically you’re in heaven. Or something pretty close to it. All of that, and we barely scratched the surface. We are already planning a return visit in the spring when fresh blooms will be in season. And I am so there for that! (K-Hubs is, too, but don’t tell anyone I said that!)

Toodle is officially a Girl Scout now, and I’m pretty stoked about this (I was one, too, back in the day). First of all, her troop is kind and friendly and diverse and LOW-KEY. We are all in for Girl Scouts, but we don’t want to be losing sleep over it. We have found our tribe, and you can’t keep us away. Toodle and I went on our first nature hike at Jester Park, and we had the opportunity to touch animal pelts. This is NOT in my wheelhouse of strengths. But I was sitting on the end of the row to help corral and chaperone the other Brownies.

So, yes, I got to handle ALL the animal pelts by putting them back in their storage bins while Ranger Randy gave his presentation. I must have had the look of 1000 expressions because Ranger Randy actually stopped mid-speech to the girls to CONGRATULATE ME ON MY FOLLOW-THROUGH as I handled the opossum pelt.

I managed to get exactly zero pictures of this life-changing event. But I DID manage to snap a few of our nature hike. And let’s just gush over Jester Park and everything it has to offer, shall we, including opossum pelts for those who are interested. 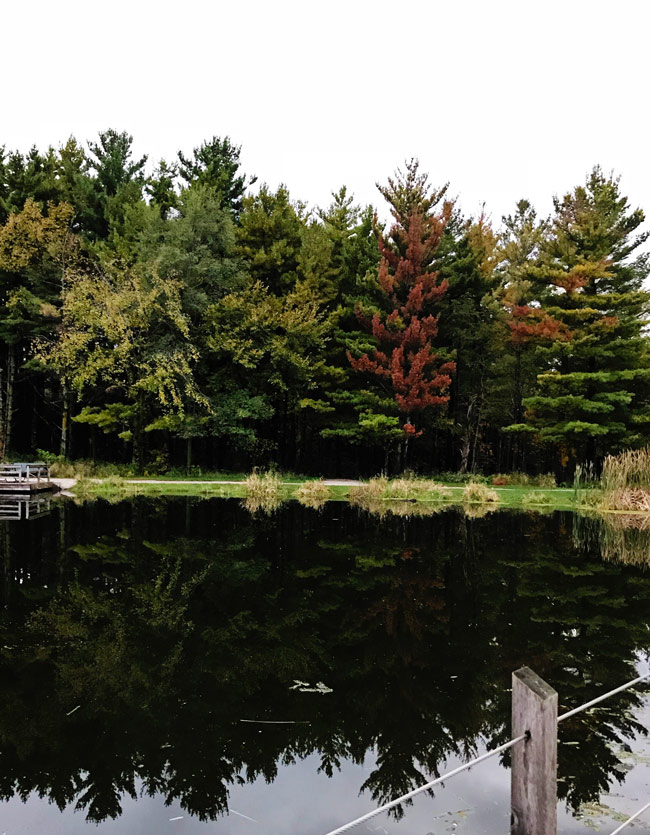 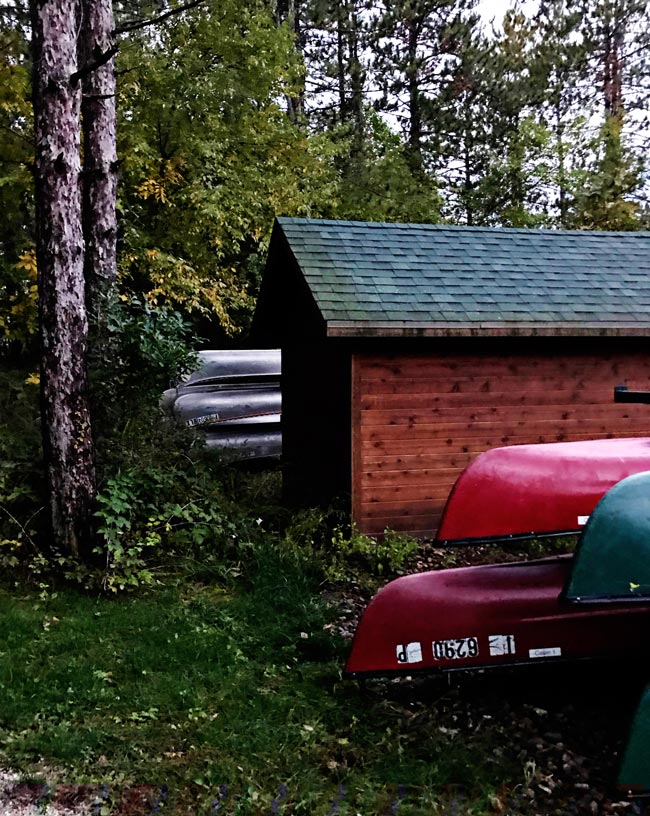 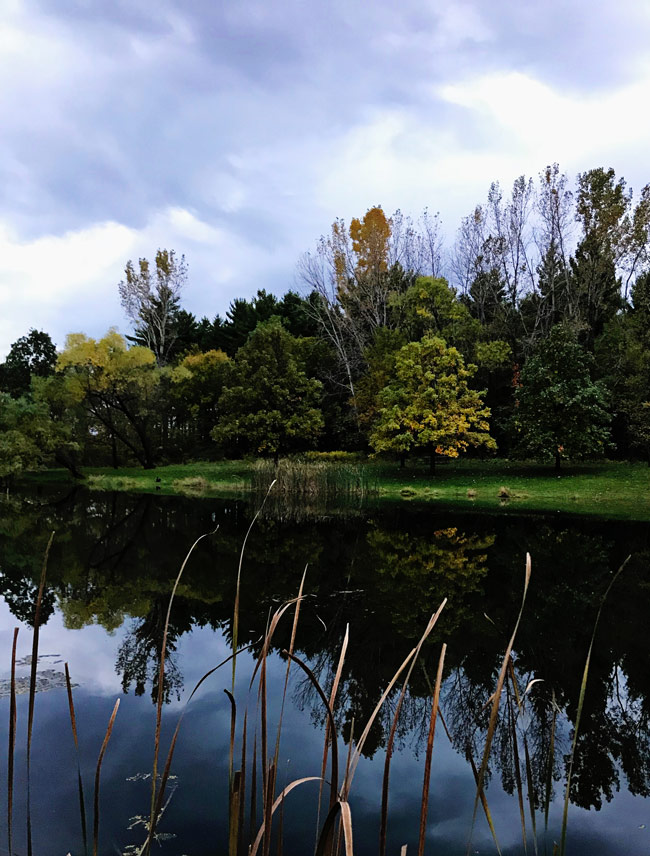 And that’s where we are this month in our lives! Where are you at? What’s on your fall/holiday agenda? Chime in and let me know!