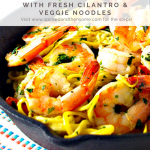 A grain-free, gluten-free alternative to restaurant-style pasta, the delightful blend of yellow squash noodles, shrimp, and cilantro make this Shrimp Scampi with Fresh Cilantro and Veggie Noodles feel like a splurge. It’s a meal for two in under 20 minutes! 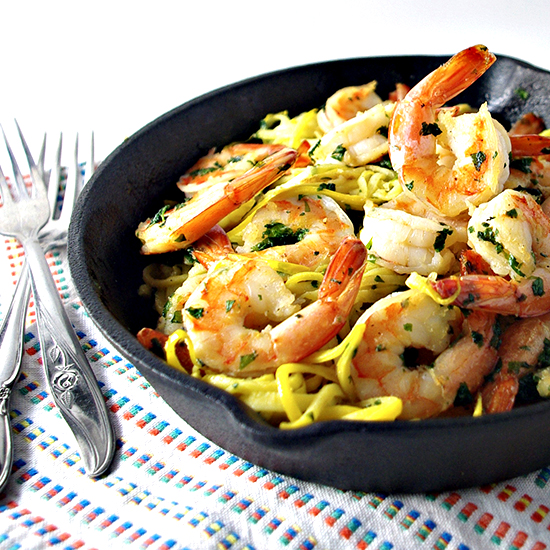 Because sometimes the only thing that will do is to eat at a restaurant. Before we had kids, K-Hubs and I would get groceries after work on a Friday night, put the groceries away, and then GO OUT TO DINNER. What in the actual what? Even our pastor, who led a Bible study we participated in before kids, talked about this phenomenon, people buying groceries and then going out to dinner. Knowing looks and laughter all around that room. Clearly, dining out was about more than just food. It was an experience, a hobby for us. And once we changed our diet to accommodate food allergies and inflammation and autoimmunity, dining out became a thing of the past.

At least for a while. We have since found Chipotle, and we love them. For real. Gluten-free, soy-free options? Where do I sign up? Do you have punch cards, and is it creepy if we move in? OSHA wouldn’t approve? M’kay. Then we’ll just see you later. Like tomorrow. Or tonight if no one is in the mood to cook.

Back to reality. So, Bible studies, grocery shopping, dining out, and becoming parents. Children also meant more date nights IN. And thusly, this recipe was born.

Also, I just used “thusly.” When was the last time ANYONE EVER USED THE WORD THUSLY? I don’t know. But I plan to use it wherever possible from here on out.

It looks complicated. But if the food is complicated I won’t make it. Because I typically want my food five minutes ago. So, rest assured, this isn’t a hard recipe to master. I wouldn’t do that to us.

I have used frozen shrimp that I then thawed before sautéing, as well as fresh shrimp, and although I like fresh, sometimes frozen is just more convenient. Follow your preference, but as far as this recipe goes, I don’t think it matters terribly. Err on the side of garlic, especially if you aren’t sure about yellow squash noodles. We have grown to LOVE them, but the first time I tried them, I had to retrain my brain that these noodles weren’t going to taste like a grain. More garlic. And then a little more. And some extra olive oil. Bam. Done. Converted. Veggie noodles, it is.

This was also the recipe where I learned how to julienne a vegetable. Have I ever mentioned that we didn’t eat vegetables when I was growing up unless they came from a can? Also fruit cocktail. I only ate the cherries. Girl’s gotta have her scruples. Anyway, this also meant that prior to creating this recipe, julienne was a woman on Dancing with the Stars or a tennis player from Belgium.

If you are scared to julienne a vegetable, don’t be. And if you’re already julienning like a boss, then, hi, my name is Morgan, and I recently learned how to julienne things. 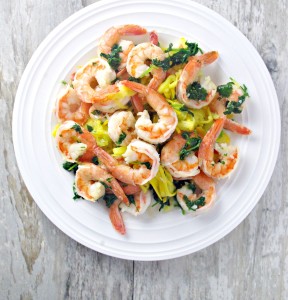 An earlier photo of this recipe!

This is now our go-to recipe for date night IN. That meal for when I-want-to-go-to-a-restaurant-but-don’t-want-to-take-the-kids. Our option for those times when I-want-to-feel-like-a-million-bucks-without-spending-a-million-bucks creeps in. And it’s so satisfying. People have asked me, “Morgan, how do you guys stay FULL on an autoimmune protocol diet?” Recipes like this one. It is super amazing.

So saddle up, Spirits, and get your seafood on. This recipe is just DYING to be made. Thusly. 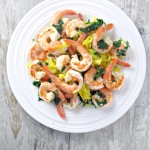 (This recipe first appeared on March 9, 2016. The photos got a makeover! Enjoy!)