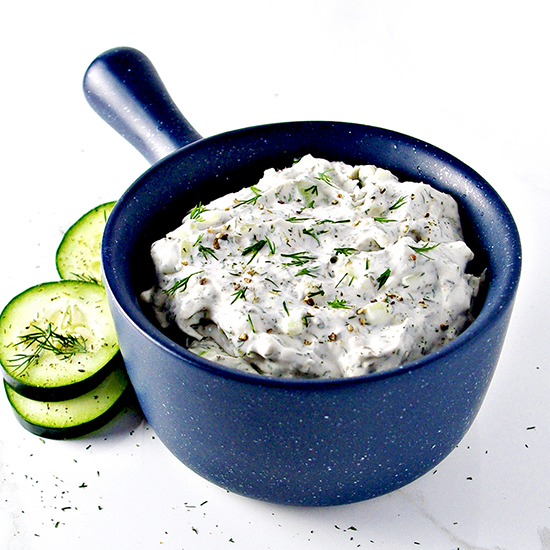 Who says Greek tzatziki sauce is just for summers and gyros? No one in this household. In fact, K-Hubs and I went on a mission to create our own Paleo Tzatziki Sauce, inspired by the original Greek food, and, Spiriteds, we have a winner. I LOVE gyros and everything that goes with them, including the sauce that, for years, I didn’t even know had its own name. I appreciated the flavor without knowing anything about it. Then, when I finally did learn about tzatziki sauce, I couldn’t pronounce it. I think my order often sounded something like, “One gyro, please. Extra of the cucumber-y sauce, please, and I’m willing to pay more.” The poor gyro, it deserves so much better.

Who am I and why are these things hard?

In spite of studying Greek history in college for several semesters with original plans to be a history professor, I never studied the food. I also never became a history professor. Decided that one for myself during the fourth quarter of my senior year of college during which I was a history major. Good timing. I graduated with that history degree but didn’t want to work in that arena. So, grad school in a complete different field, here I come. One MBA later, I now work in marketing and higher education.

But, seriously, about that sauce full of cucumbers and dill. Another of life’s great matches made in heaven. And I don’t even like dill or cucumbers by themselves, for the most part. But, together? Holy cow, WHERE DO I SIGN?????? So many signatures I finally had to make my own Paleo Tzatziki Sauce. The obsession is real. 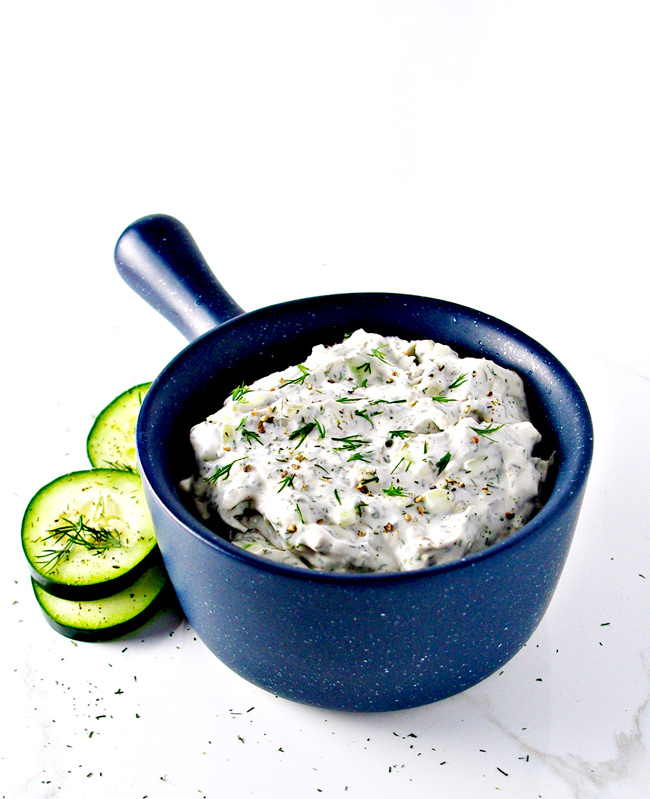 But you can’t call it an obsession until you can pronounce it. And I couldn’t pronounce tzatziki. Again, ever the jerk to the gyro (which I DO know how to pronounce – yuro/euro), I’m the exact reason I can’t have nice things. So I schooled myself, did a little pronunciation research, and learned more than I bargained for. Because, as it turns out, there are two ways to pronounce tzatziki (I suspect there are infinitely more, however the source I found, a pronunciation video on YouTube, offered two). The English version sounds a little like tsat tsiki, with almost a tisk sound. And now that I know that, I totally see it in the original spelling. The Greek version sounds more like chot chiki. Today I know a little more than I did yesterday. Progress.

Once I learned the pronunciation then I needed to know more about how to savor the sauce. What if it’s the middle of winter and I don’t have a state fair full of gyros to visit and I need some Paleo Tzatziki Sauce on something? Will it go with a salad? Yes, yes it will. Will it go well with a variety of meats? Umm, that’s a definite YES. What about vegetables? Basically, also a resounding yes. You can’t lose with this stuff. It’s the black shirt of sauces. It goes with everything. 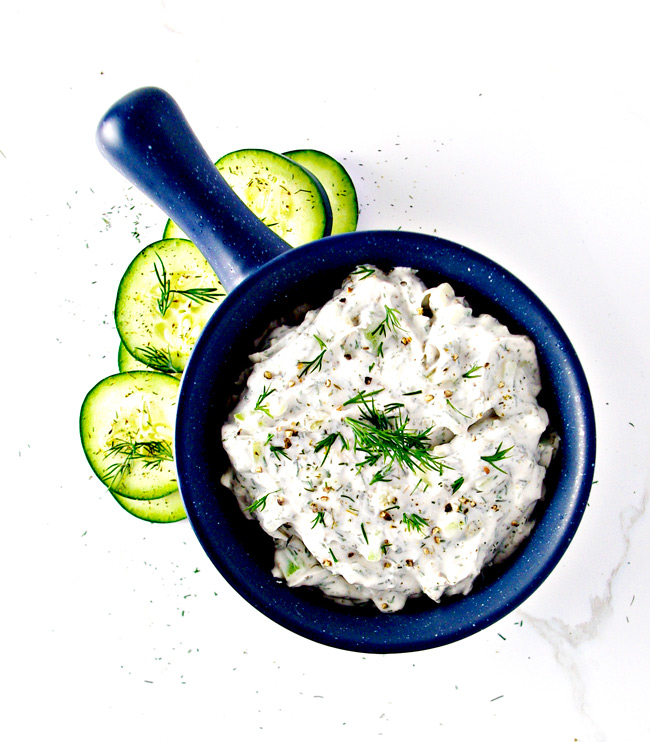 Traditional tzatziki sauce is full of dairy and soy, though, and, if like us, you don’t consume those then the traditional sauce is likely off the table.

Paleo Tzatziki Sauce has all the delicious flavor of the traditional sauce, and it’s also extremely versatile. Add a little more or a little less of each ingredient as you go. In today’s recipe we are working with full-fat coconut milk in a can, which you can find in the baking aisle near the condensed milk.

Truthfully, I didn’t love full-fat coconut milk in the beginning of our dietary changes. It wasn’t until recently I started nibbling at just the cream, the portion that separates from the oil in the can and sits at the top (see pictures below). I now LOVE that stuff and eat it with nothing more than a spoon on the regular. To get the best cream that also easily separates from the oil, put the can in the fridge for several hours before you plan to make a batch of Paleo Tzatziki Sauce (or even overnight). Then skim the top of the can with a spoon to get all the cream and leave the oil. 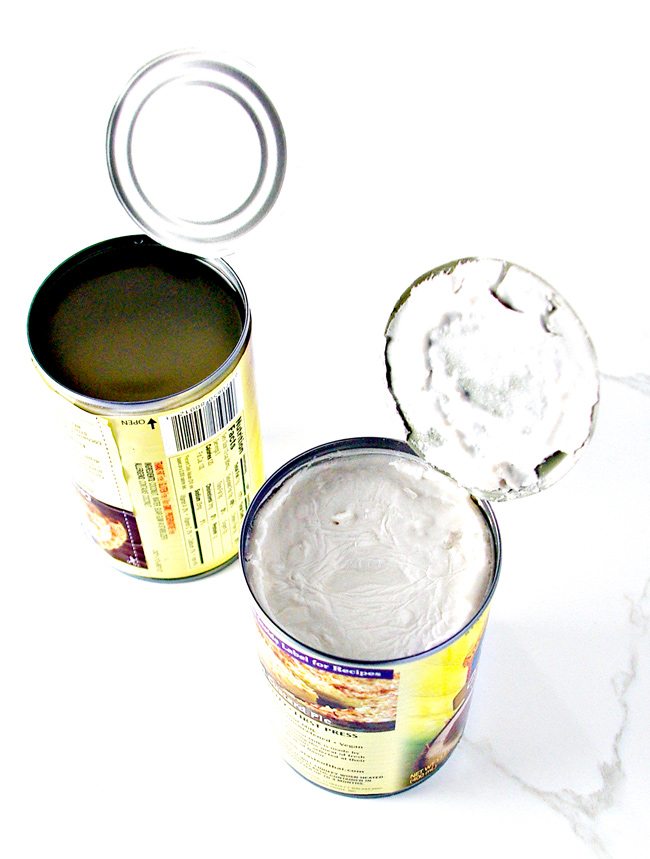 Now, let’s have a heart-to-heart in the event some of the cream is still blended with the oil. Like you, I don’t want to waste food. But for the LOVE OF LORI LAUGHLIN DO NOT ADD OILY COCONUT MILK CREAM TO YOUR PALEO TZATZIKI SAUCE AT THE BEGINNING OF THE PROCESS.

Save it for a smoothie or just eat it with a spoon. You don’t actually have to throw it out. But, whatever you do, don’t add any softened, oiled coconut milk cream at the start of this recipe. You’ll lose control of the consistency. Full-fat coconut milk changes consistency quite often depending on the temperature, what is added to it, and how it’s stored. It will even soften just in the time it takes to prepare the recipe and become firmer the minute you store your sauce in the fridge. If at the end of preparing the sauce yours ends up firmer than you’d like, THEN add spoonfuls of softer coconut milk to the sauce until the desired consistency is reached.

Now that we have that out of the way, let’s move forward with our Paleo Tzatziki Sauce and talk about cucumbers. There are countless ways to prepare a cucumber for this recipe. Peeled, not peeled. Diced, minced. Grated, not grated. Really, these considerations are all up to you. For this recipe our resident slicer-dicer, K-Hubs, peeled and finely chopped the cucumber, so that’s what you’ll see in the instructions below. 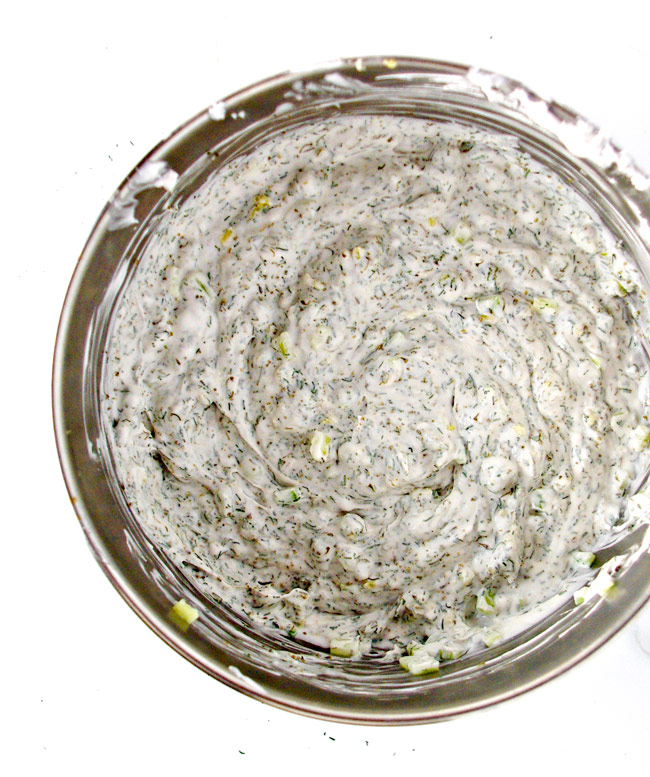 Then we added dill weed, lemon juice, garlic, and sea salt. If the final result is still too rich for you, then add a dash of garlic salt. This is also the stage at which you can add a little extra runny coconut milk if your batch is firmer than you prefer, especially if you want it as a salad dressing. Today’s recipe errs on the thicker side, making it the perfect spread for main dishes, sandwiches, and wraps, to name a few. The thicker consistency is also great for use as a dip with chips or crunchy veggies. 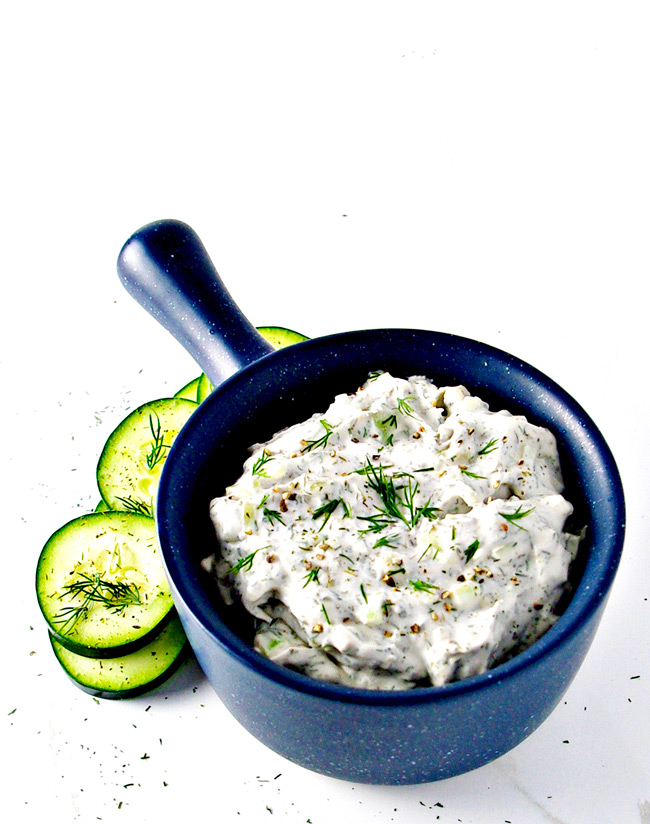 Spiriteds, grab a spoon or a gyro or a lettuce wrap and dollop a spoonful or 40 of this on top. Paleo Tzatziki Sauce is seriously everything that is good and right and well with this world. 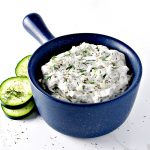