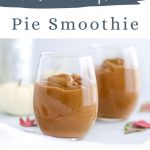 Paleo Pumpkin Pie Smoothie is a delicious blend of canned pumpkin, spices, banana, and your choices of sweetener and dairy alternative! Mix and match ingredients for a variety of combinations to get the flavor you want! {Paleo and Vegan-Friendly}

Paleo Pumpkin Pie Smoothie is an aromatic twist on a pumpkin/coconut milk combo K-Hubs enjoys on the regular. And when I say “on the regular” what I really mean is he eats pumpkin basically every day. He and our second born eat it straight out of the can, while the firstborn and I stand nearby throwing side-eye their way. WHO EATS PUMPKIN PLAIN? A lot of people. But, Spiriteds, I tried it. I really did. I’m convinced, however, I can figure out y = mx + b before my tastebuds will abide eating pumpkin straight out of the can.

If I am to eat this vegetable, I will need cinnamon and allspice and nutmeg and maple syrup or honey or agave nectar or whatever else I can get on my tastebuds before I ever give in and eat this stuff straight. I cannot abide, and so I don’t. I would do another girls’ weekend to the Mega Mall with Mom and The Gram where, at one point, I slept in the hotel bathtub to hide from their snoring, true story, before I would ever sneak a snippet of pumpkin from the can. That can is where my tastebuds’ hopes and dreams go to die. K-Hubs thinks I’m dramatic. I say straight-up pumpkin and I will never split a BFF necklace between the two of us.

The good news is those of us under this roof who LOVE pumpkin straight from the can and those of us who absolutely must have spices and all the goods added to it, collectively agree Paleo Pumpkin Pie Smoothie is ridiculously good. Like, good-bye, debate on the issue, we are all good here.

K-Hubs took it a step further and agreed Paleo Pumpkin Pie Smoothie IS better than canned pumpkin by itself. You heard it here first, folks. Really, though, this smoothie is for just about anyone. If like me, you’re a little dubious about the whole thing, then give this spiced-up smoothie a try. The balance of flavors is mind-bogglingly good. Basically, if you could bottle up fall then this is the flavor you’d get.

I’ll be over here sipping on my smoothie while K-Hubs alternates between his smoothie and, no doubt, a little pumpkin straight from the can. Now, about that whole y = mx + b thing…

This Paleo Pumpkin Pie Smoothie is full of robust flavor, lots of delicious spices, and just the right amount of sweetener to turn this orange vegetable into a fall wonderland. As you can see, I even, gasp, added a banana to this deal, and I never add bananas to smoothies that aren’t citrusy. But I added it here, freaked out, worried it would ruin everything, took a few bites, and then realized K-Hubs was right. The banana was a totally appropriate addition to this spicy recipe.

This smoothie is super-easy to make. All you need to do to make it is add the ingredients in the order they’re listed to a high-speed blender and mix on HIGH until you achieve a smooth consistency. To prevent the dates from sticking to or getting stuck under the blades, chop them into small-ish pieces before adding them to the blender.

Whether you are team apple or team pumpkin (or team BOTH), there is a recipe here for everyone!

Spiriteds, wherever you are on the whole plain pumpkin/spiced-up pumpkin thing, I am, as always, glad you are here. 🧡 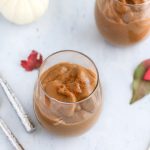 Paleo Pumpkin Pie Smoothie is a delicious blend of canned pumpkin, spices, banana, and your choices of sweetener and dairy alternative! Mix and match ingredients for a variety of combinations to get the flavor you want! {Paleo and Vegan-Friendly}