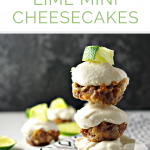 These vegan, gluten-free, and soy-free No-Bake Vegan Key Lime Mini Cheesecakes are a healthy take on a traditional dessert. Ready to go in under 30 minutes! Paleo variation included! 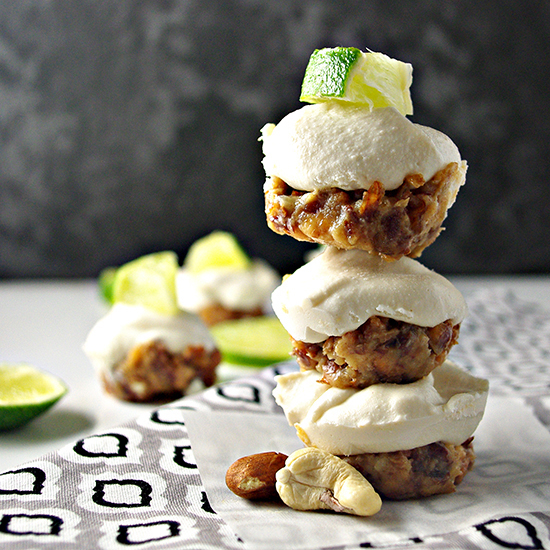 I have a confession to make. I don’t typically love key lime anything. Not key lime pie. Not key lime cheesecake. I mean, if someone would offer one to me, I’d think, “Well, how hungry am I, and is it 95 degrees out? Then maybe. Because the lime will make me think I am cooling off.” But I would never say, “Let’s go to that restaurant so we can eat key lime pie.”

And then I started seeing healthy recipes for key lime cheesecakes and key lime pies, and instead of cream cheese (or whatever you would use in such a recipe) people were using cashews.

But I still wasn’t sold on the idea. So I played around with cashew cream instead. This decision was wise. Finally, I said, “Well, maybe Spirited readers would want a recipe of some sort using this cashew business with limes and whatever else one uses to make such concoctions.”

Now that I have started making these No-Bake Vegan Key Lime Mini Cheesecakes, I CANNOT, I WILL NOT, EVER STOP EATING THEM. The. End. 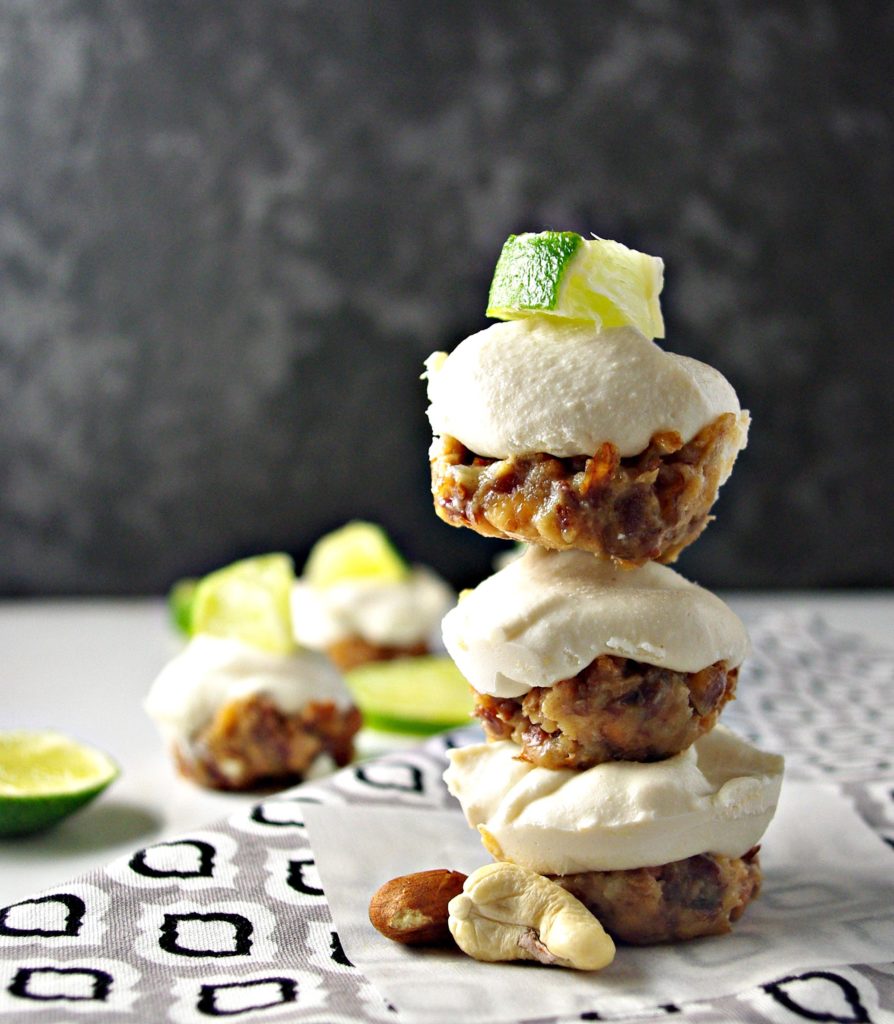 I prefer them to the traditional versions. And you might wonder, why should you care? You might also think I am slightly biased since I made them. But this preference can be chalked up to the fact that while they are rich and lime-ful (that’s not a word, but let’s pretend it is), they aren’t over the top. Nope. Not these. They have just the right amount of zing. And you control just how much zing goes into this thing, Dr. Seuss.

The crust is everything. Let me just say that dates and soaked almonds give a graham cracker crust a run for its money. There were a lot of variations out there in the world, and I chose to add a little agave nectar to my crust. It definitely makes it soft, which might not be your thing. But since my favorite cookie is the dough, I don’t mind a slightly softer crust. However, I think you can reduce it, if you like, or eliminate it altogether. I have seen other recipes go without.

I do go to the trouble of greasing my mini muffin pan, although I am not convinced that’s entirely necessary. As for plopping the crust into the mini muffin tin cavities, I use a teaspoon to fill each cavity approximately 1/4 to 1/3 full with crust, pressing down to even it out.

Then I place the pan in the freezer while I work on phase two, the cream. Although the crust never officially freezes, it hardens into place, which makes adding the cream that much easier.

As for the creamy filling, where do I even start? Lime is so wonderful for everything. As I made these, I thought about birthday parties and baby showers (for other people’s babies!). I thought about a handful or 12 of these and a good book and a warm blanket in the fall. I thought of family gatherings and people not thinking you’re weird for eating different. Because No-Bake Vegan Key Lime Mini Cheesecakes are so delicious no one will care that they aren’t gluten-filled, dairy-filled confections. Nope. These delights are vegan with a quick twist for a paleo version.

I did soak the cashews for a few hours to encourage blending, and if I am planning ahead, I’ll soak them overnight. As for the zing, it’s all in the lime juice. I go a full 3/4 cup. However, if you are looking for a little less zing, you could reduce it to 1/2 cup. I admit, though, that extra punch is worth the extra juice. And do I use fresh limes or juice from a bottle? To go completely paleo, I’d use the juice of fresh limes, or even throw them in the mix (which I have done when I thought this thing needed more zing, Seuss). However, if you are two limes too short, juice from a container works with this recipe. What works for you will work for this.

I like to dollop the creamy mixture onto the hardened almond date crust, and then I put the cheesecakes back in the freezer to set. I store them there and then remove prior to serving. When they stay out too long, No-Bake Vegan Key Lime Mini Cheesecakes soften, as evidenced by the following photo. Whoops! Guess the photo shoot is over. Time to eat! 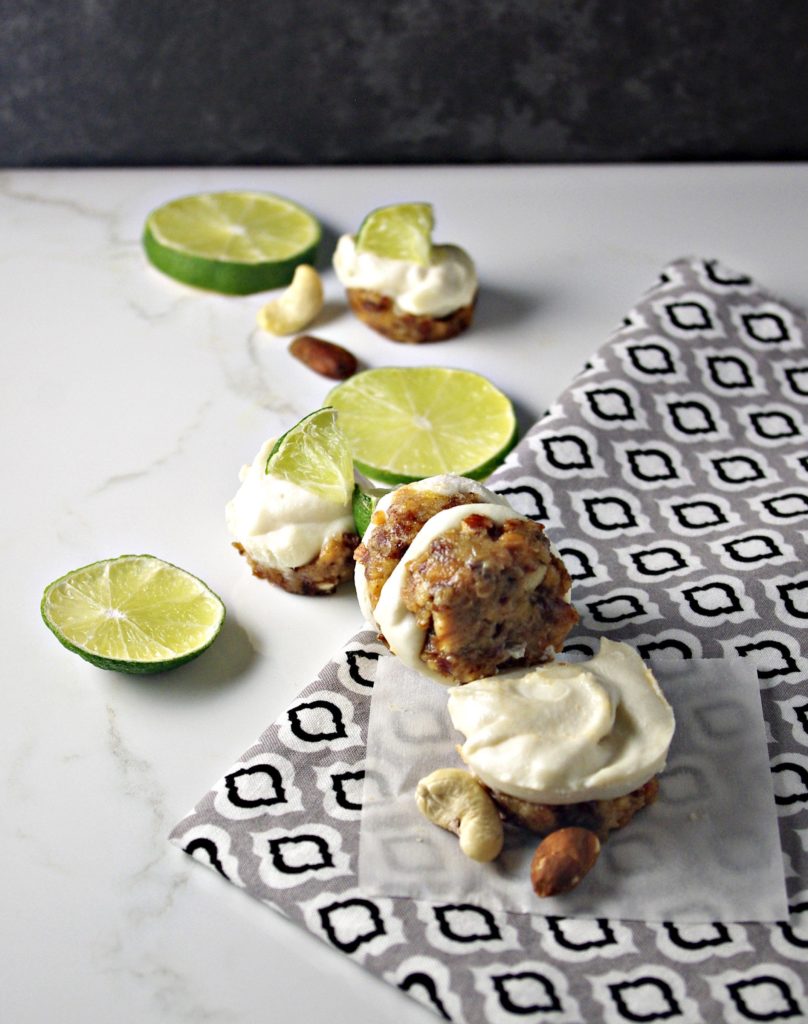 Once the mixture has set in the freezer, you have a handful of options. One, you can pull them out of the freezer and eat them all right then and there. This seems like a perfectly reasonable option. However, if you need to save them for an event, you can, two, pop them out of muffin tin using a table knife and store them in an airtight container. Or, three, you can store them in a plastic bag, if plastics don’t bother you. We try to stay away from plastic whenever possible because of our autoimmune issues, however, sometimes nothing beats storing food in a baggie.  Just take a few extra moments to remove as much air as possible. These No-Bake Vegan Key Lime Mini Cheesecakes maintain their form best in the freezer, but little ice crystals form on the top if air gets trapped inside for too long.

How did I remedy that?