The Gram was a fabulous cook.  My mother was a terrible cook.  And I’m somewhere in the middle.  Whereas Gram could bake a 6-layer cake with her eyes shut and one hand tied behind her back, Mom found herself in the great pumpkin-pie debacle of the 1970s. The story goes that she tried to bake a pumpkin pie for my dad not long after they were married.  With good intentions she plopped the pumpkin filling in the crust and shoved it in the oven.  That’s right.  No spices, no other ingredients.  Just the crust and the filling.  She served my dad a slice, and he ATE IT.  Well, the part that wasn’t burned. Since I’m an average cook, I need repetition to get a recipe right.  And one of my favorite recipes also stems from one of the best summers I spent with my dad sometime during the early ‘90s. He taught me to bake an apple pie. And it’s only taken me about 20ish years to get it mostly right. NOTE:  You’ll need more than crust and apples for this to work.

As for the leftover crust that was trimmed off?  Well, we don’t waste things on either side of my family.  We also don’t believe in foodborne bacteria.  So, germs be damned, we’re eating that raw crust with the leftover cinnamon/sugar/flour mixture.  We’ll have digestive systems like steel and be ready for the apocalypse.  What are dads for, anyway?

My Mom, My Dad, and the Great Pumpkin-Pie Debacle of the 1970s 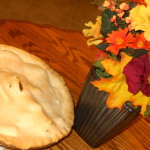