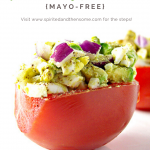 This Mayo-Free, Paleo Egg Salad is ready to go in under 30 minutes! 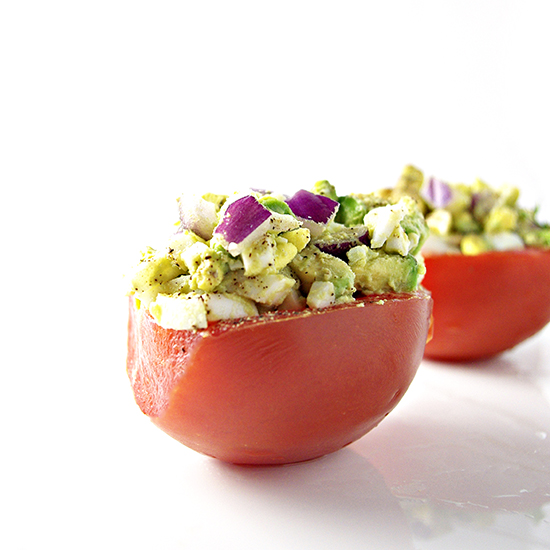 No one could ever just cook in my family. Either they didn’t know how (Mom), there was some major debacle surrounding the food (also Mom), or someone outside the immediate family attempted a recipe and didn’t use the correct ingredients.

For example, there was Mayo-gate of the ’90s in which The Gram gave her potato salad recipe to a friend, probably a relative in that small town, only to discover said friend/relative used mayonnaise in place of Miracle Whip.

The Gram could not even. 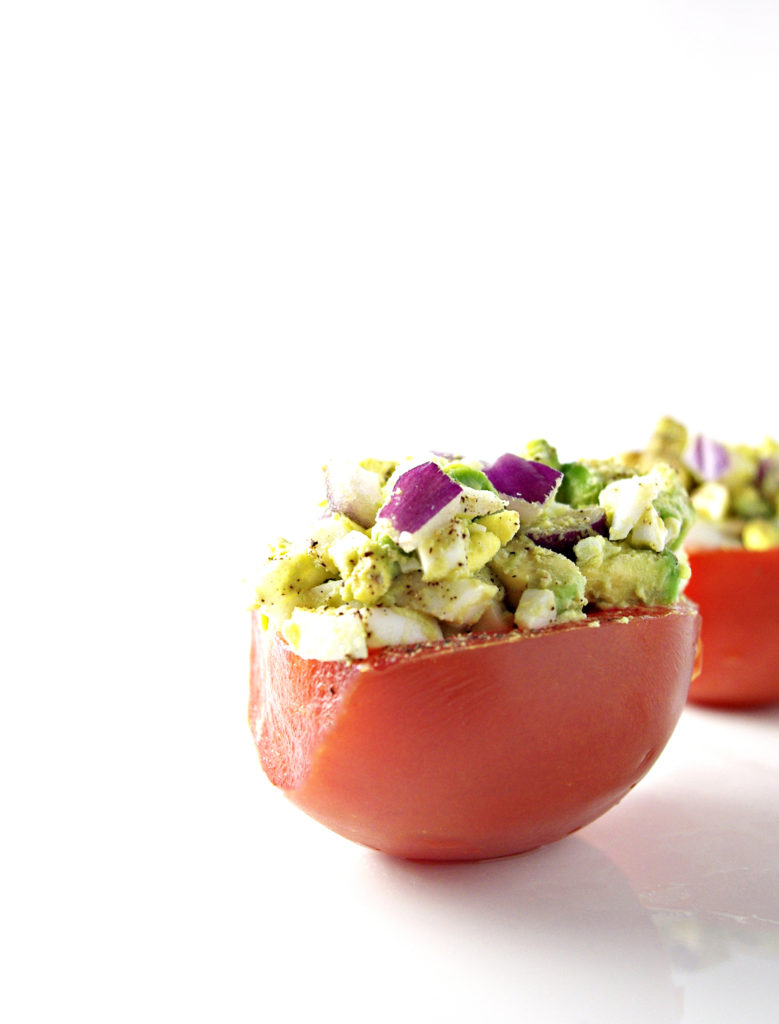 Mom couldn’t either. Usually one to remind The Gram to behave when we were in public, even she was overcome by the lack of Miracle Whip in the potato salad. I mean, WHO DOES THAT? Probably everyone. But, according to Mom and The Gram, that simply wasn’t the decent thing to do. And speaking of decency, no level of it was going to keep them from their petty party as they coughed and sputtered their way through the meal.

You couldn’t take us ANYWHERE, ever.

What does this story even have to do with anything? Today’s Mayo-Free, Paleo Egg Salad recipe made me think back to The Gram’s delicious potato salad, a time when petty reigned supreme. When love meant starting a battle in 1994 over the importance of owning a double boiler (the Gram was convinced it was a gateway drug to remarriage) only to pick back up in 1997 where one left off. When love meant never forgetting anything. Ever. Especially if it included a double boiler. And as for that double boiler battle? Mom won by managing to remarry without ever buying one. 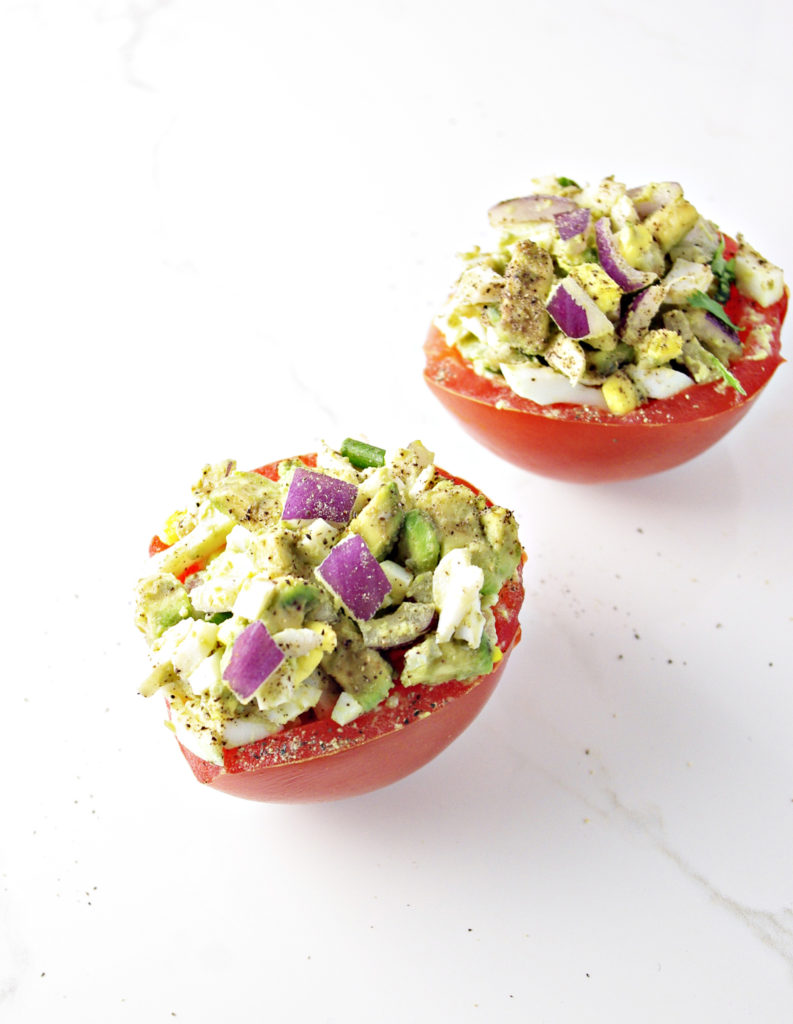 Oh, and, as the title implies, this recipe doesn’t contain mayonnaise or Miracle Whip. So no petty worries there, except Mom and The Gram would likely fall over dead at the thought of a Miracle Whip-less egg salad. Insert all the petty. But, they would come around eventually, I think, because this salad tastes ridiculously awesome. And it’s the perfect holiday side dish when you reach your max limit on sweet potatoes and pumpkin and beets.

An old chicken salad recipe served as the inspiration this time (minus the chicken and chow mein noodles). Crispy, succulent celery rounds out red and green onion, diced avocado, and homemade drizzle that turns this into next-level egg salad. Also, the tomato cup makes another appearance. However, if you don’t have a tomato on hand, this mayo-free egg salad stands just fine on its own.

Why is this Mayo-Free, Paleo Egg Salad becoming a staple in our kitchen? Because it: 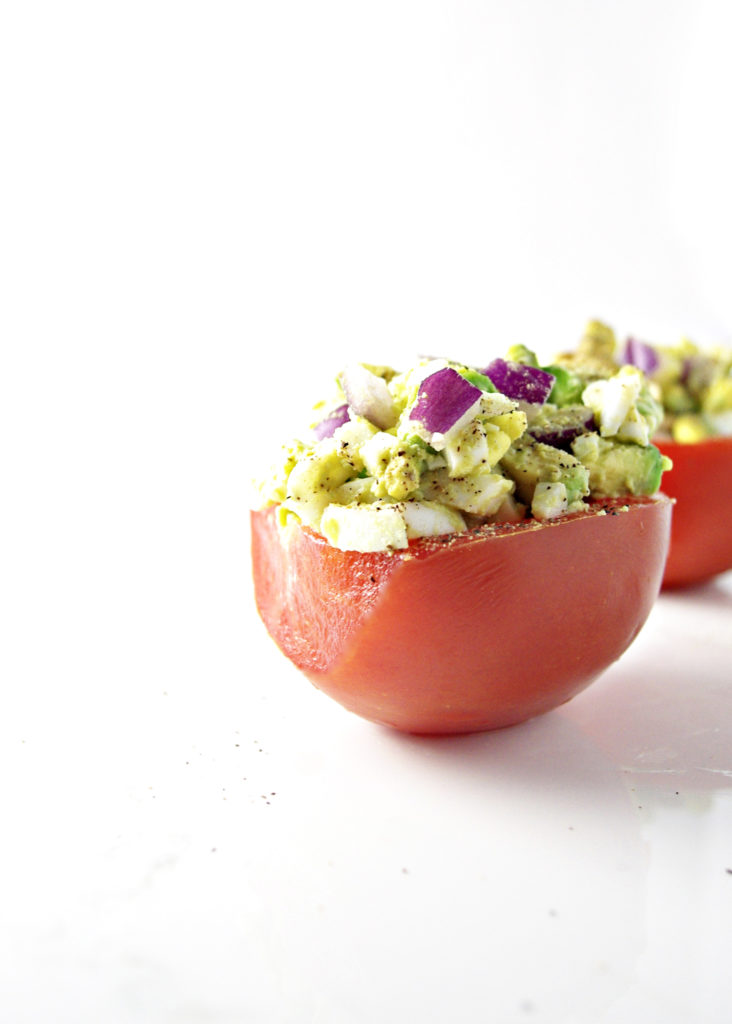 Because we are making this more and more, I have found chopping the ingredients while the eggs boil makes the process much faster. If I’m really thinking ahead, I’ll have hard-boiled eggs on hand for that moment when nothing but this recipe will do for lunch or dinner or because it sounds good.

I find myself fantasizing about what else I could pair this salad with. Yes, it goes well with tomatoes, but it’s too good to limit, and this salad needs all the outlets one can muster. Butterhead lettuce leaves come to mind as does cilantro, so I’ll just sit over here, keep fantasizing, and then get back to you. And by “fantasizing,” clearly I mean “eating.”

Spoon up, Spiriteds. This Mayo-Free, Paleo Egg Salad awaits you. 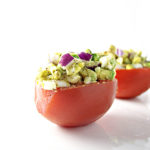