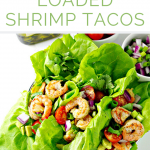 Loaded with shrimp, tomatoes, avocados, cilantro, two kind of onions, and drizzled with a peppered olive oil dressing, these grain-free, gluten-free Loaded Shrimp Tacos are just waiting to be devoured. Plan accordingly. Think one taco. Or 10. 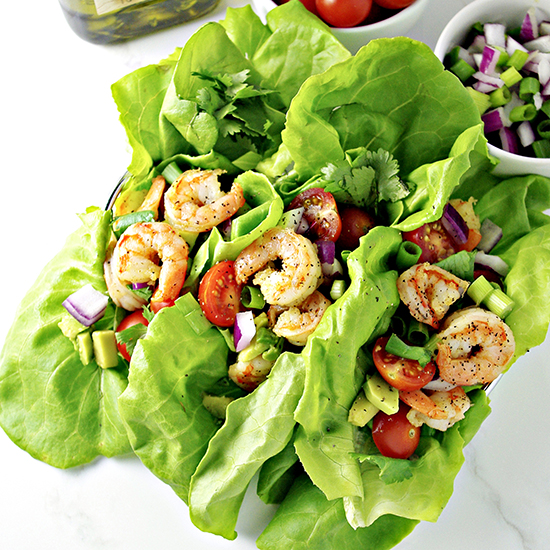 Shrimp tacos! Whaaaaaat?????? Yes. And they are super healthy but not in a cardboard kind of way. You won’t feel like you’re eating rice cakes. Actually, I like rice cakes. The buttered popcorn flavor. So that’s kind of telling. Anyway, Loaded Shrimp Tacos, well, they’re the real deal, and I cannot even. When we switched to a primarily paleo diet, one of the food groups I missed the most was tacos. Because, yes, Virginia, tacos are their own food group.

If I had my way, my food pyramid would look like this: cheese/summer sausage (that’s one group), chips/dip (that’s another group), chocolate/peanut butter (the third group – how many groups are there in the actual food pyramid anyway???), and Coca Cola. Ooh, and bacon. Ooh, and manicotti. And I can’t leave out almond paste. I don’t need it in cookies or anything fancy like that. Just the paste. And maybe a spoon. I think some variation of this food pyramid represents more than 50% of the palate proclivities of Mom’s side of the family. You can’t deny your genetics.

But, I must confess, following this paleo-ish/autoimmune protocol diet has actually been quite enjoyable. Yes, I said enjoyable. I mean it, too. My food pyramid is evolving. Slowly. And these Loaded Shrimp Tacos are making that evolution happen a lot faster and run much smoother than would otherwise be the case. 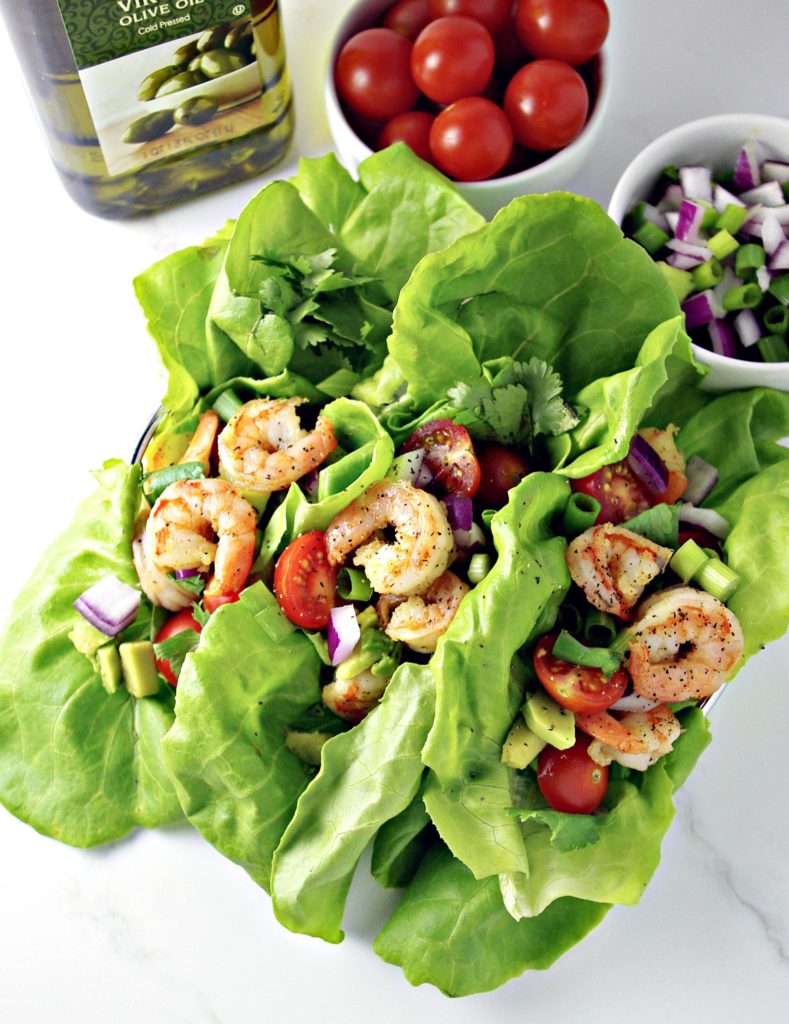 Why choose these over other tacos? Well, in our family, food allergies and autoimmunity prevail. So, for us, those two elements absolutely drive what we eat. But I have to say, these are SO FREAKING GOOD. And I don’t have to worry about how I am going to feel an hour later if I eat one or 10. I once went to a taco joint and audibly pondered getting three loaded tacos. The guy behind the counter said, “Wow, ma’am, we’ve never had anyone down more than two.” Step back, dude, and watch this pro. I ordered two, contemplated a third, got busy talking, and then the restaurant closed for the night. There is always next time. But it is ON!

So, about that secret concoction ==> Add a little extra olive oil to your skillet (and by “a little” I mean “A LOT”) plus extra pepper (also A LOT) while you sauté the shrimp. Leave the oil and pepper in the pan after you transfer the shrimp to your tacos. Then, drizzle the peppered olive oil over your tacos. How absolutely ridiculous and wonderful is that? So ridiculous. And so equally awesome. 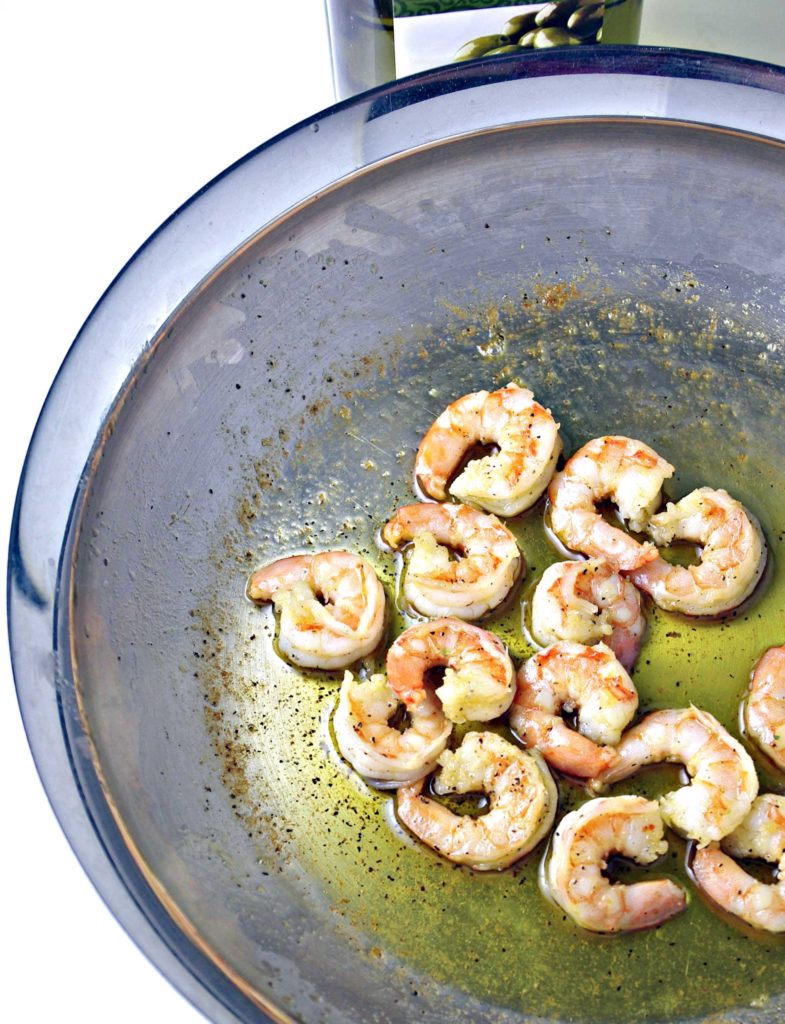 My old self would have turned her nose up at lettuce tacos, wondering, Lettuce taco shells? Whose words? But then she would have noticed this extra drizzle action and would have totally put her nose back down.

My new self, on the other hand, is all over this business FROM THE START, and so is K-Hubs. We scarfed our shrimp tacos down while the girls were playing upstairs because we didn’t want to share. We topped the tacos off by pining for more. Is it a proud moment for us? Define proud. Because I am seriously wondering if there is a limit to how many of these a person could reasonably eat in one sitting without turning into the crazy relative everyone humors. “Oh, there goes Aunt Morgan and her 10 tacos. Don’t mind her. She’s harmless. What’s that? Cats? Nope. No cats. Just tacos.”

Honestly, this recipe makes three tacos, but probably you should just double or triple this bad boy, because they are so good. Layer them however you like. I usually add a few onions and cilantro first to create a bed. Then I add a few shrimp, some avocado, and the tomatoes. Next I add more onion and cilantro. Finally I top with the remaining shrimp and add the drizzle. So amazing. As for the lettuce, I am currently in a relationship with butterhead lettuce, as pictured here. Toodle and I cannot get enough of that stuff. But a sturdier choice would be romaine. If I were serving this to others outside of me and K-Hubs, then I would offer the choice. Flavor (butterhead) or durability (romaine).

Filling, for sure, yet not overwhelming. How utterly delightful is that? Totally delightful. 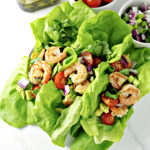