This Homemade Beef Broth recipe is made in the slow cooker and is perfect in countless soups, stews, and other savory dishes! Even better? You can make multiple batches using the same soup bones! {Paleo}

There is something so tantalizing about brewing a batch of deliciousness in a slow cooker. Inevitably, the house smells amazing, you know you’re going to end up with a scrumptious something in due time, and the slow cooker’s doing all the work. Meanwhile, you’re just doing your part in society by catching up on Midsomer Murders, Murder, She Wrote, Murdoch Mysteries, and Father Brown.

But never mind that. If you fancy yourself a sleuth, far be it from me to judge. I’m still convinced I could be a fourth wheel to Perry Mason, Della Street, and Paul Drake. I’d help them solve cases just under the wire. Morgan, that show has been off the air for decades. Also, it was a show. Duly noted.

So instead I’ll stick with watching the classics while slow cooking mouthwatering recipes. And today’s Homemade Beef Broth fits the bill. The cooking process is straightforward, your house will smell incredible (I seriously wish it were possible to photograph how a recipe smells), and the final product is match-made for dinnertime come fall and winter. You can’t go wrong.

The key to making Homemade Beef Broth work for you is determining what bones to use. And there are a lot of options, but I have narrowed it down to two.

NOTE: Option one will likely result in a richer flavor. However, working strictly with marrow bones, as in option two, will also work.

I planned to start with the first option. But when I went to the grocery store, they had removed all the bones from their beef products. They did, however, have marrow bones on hand, and that’s what I ultimately used in this recipe.

So making your own Homemade Beef Broth isn’t difficult, but you might need to do a little sleuthing to find the right base ingredients to suit your needs. It’s also important to note that the recipe below is for a base beef broth. It is intended for use in other recipes and, therefore, has a very basic flavor. I have included suggestions for how to spice it up in case you want to enjoy it by itself or you simply like super-flavored broths.

Let’s get started so your house will smell wonderful!

NOTE: If you want a more flavorful beef broth recipe or you intend to enjoy it by itself, I found that adding onion salt/powder, garlic salt/powder, or more sea salt did the trick. Thyme, basil, oregano, cumin, and sage would also be tasty additions.

HOW TO MAKE HOMEMADE BEEF BROTH:

Below are instructions to make Homemade Beef Broth. Note that when frozen the broth will expand, so make sure to leave extra room in the freezer jars so they don’t crack when stored long-term.

HOW TO MAKE MULTIPLE BATCHES:

It is super-easy to make several batches of Homemade Beef Broth, reusing the same soup or marrow bones. Read on to see how we do it in the Spirited kitchen.

Do you like the idea of making your own broths at home? If YES, then check out these recipes for Homemade Bone Broth and Homemade Vegetable Broth.

And if you’re curious to learn more about making your own beef broth, you can check out The Pioneer Woman’s recipe for How to Make Beef Broth. Her article helped me get started! 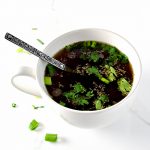 This paleo Homemade Bone Broth recipe is easy to prepare! It also goes well with other soups, stews, and savory dishes. Get the most out of it by reusing the soup bones for subsequent batches! {Paleo}