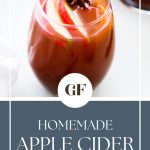 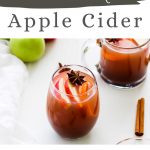 This gluten-free Homemade Apple Cider recipe is full of flavor thanks to sweet and juicy apples, ground cinnamon and cinnamon sticks, allspice, cloves, oranges, and your sweetener of choice. {Vegan and/or Paleo}

I don’t know where you’re at in your fall/winter culinary repertoire, but I will tell you it’s CIDER TIME in our house. Omigosh. The sweet and aromatic flavors of this simple apple cider recipe are where fall and winter and early spring shine. Fluffy sweaters, buttery blankets, and warm mugs of deliciousness. I WILL say yes to that. Homemade Apple Cider understands this and pairs well with all the aforementioned fall and winter and early spring examples.

This particular apple cider recipe is prepared in a stockpot. I love this recipe because it produces an apple-y…that’s a word, right? Apple-y?…anyway, an apple-y flavor. It’s light, delicate, and smooth. And once you’ve made a batch, there’s no going back to store-bought cider.

OKAY. When I made a batch, there was no going back to store-bought cider. I LOVE playing around with flavors and sweetness levels and changing the ingredient quantities up, if I’m so inclined. If you’re #same, then let’s do this.

I said it just a few paragraphs ago, and I’ll say it again. It’s cider time.

What apples should you use in a cider recipe?

Here’s the thing. I use whatever apples I’m in the mood for. Or whatever is available at the store, if I’m being honest. Any of the following are worth trying:

Experiment with mixing and matching apples for more flavor variations. I often pair a sour variety with a sweeter variety.

Why go to the trouble of making your own Homemade Apple Cider?

Aside from the smell it produces, which I may have already mentioned, this recipe is:

Did I also mention this homemade apple cider smells really freaking good? Cider on fleek, if you will.

Tips to prepare Homemade Apple Cider in a stockpot

To make this, I rinsed the apples and sliced them into quarters. Leaving the skins on, I dumped them into 16 cups of water in my stockpot, added the spices, cinnamon sticks, oranges, and sweetener, and that’s about it. A third of the way though simmering time, I did come back and mash everything with my potato masher. By then the apples were soft enough to mash, the spices had started to set in, and the flavor was starting to take hold.

Once the mixture has simmered a full three hours, it’s time to strain it. I absolutely highly suggest you use a mesh strainer or cheesecloth for this, and I also suggest you repeat the straining process at least one more time, if not more. I found that with each strain, I was able to reduce the grittiness of the recipe without sacrificing the flavor.

If a sludge collects in the strainer, then, using the rounded side of a large spoon or ladle, gently press the sludge in circular motions. This releases the juice without forcing the sludge through the strainer.

Store this magic in glass jars for a few days or freeze for 3-6 months. Plan to shake it before consuming as many of the spices will collect at the bottom of the container. Enjoy hot or cold. Add apple slices, orange slices, star anise, or cinnamon sticks for added flavor and flair.

Because flavor and flair are important. Always.

More warm hugs in a mug!

If you’re in the mood for more warm drinks, then check out these warm hugs in a mug! 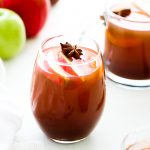 This gluten-free Homemade Apple Cider recipe is full of flavor thanks to juicy apples, ground cinnamon and cinnamon sticks, allspice, cloves, oranges, and your sweetener of choice. {Vegan and/or paleo}