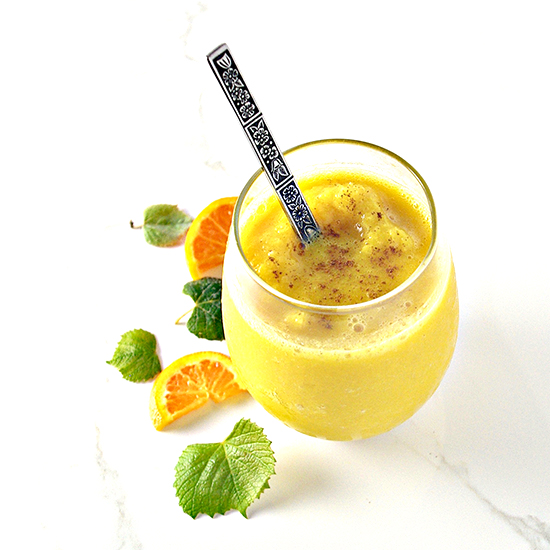 Is it still summer, Spiriteds, or is it finally fall? If you’re stuck somewhere in “summerfall,” then have no fear. Cinnamon Vanilla Orange Juice bridges the gap between seasons (as does this succulent Homemade Concord Grape Juice recipe). Fresh clementines harken back to the citrus flavors of summer while cinnamon and vanilla tease the tastebuds with seasons in store.

I’m a fan of orange juice, but I must say there is something about a hint of cinnamon and vanilla to take a traditional morning beverage up a notch. It tastes a little something like that orange drink company that rhymes with “hoolius.” Just sayin’.

Furthermore, I confess that when I make a batch, I get a little precious about it. Basically, I do one of two things, with varying levels of preciousness involved. One, I chill the mixture and let it thicken overnight for a delicious, dairy-free creamy concoction at breakfast. Or, two, I freeze the mixture and then let it partially thaw for a lumpy slush texture. 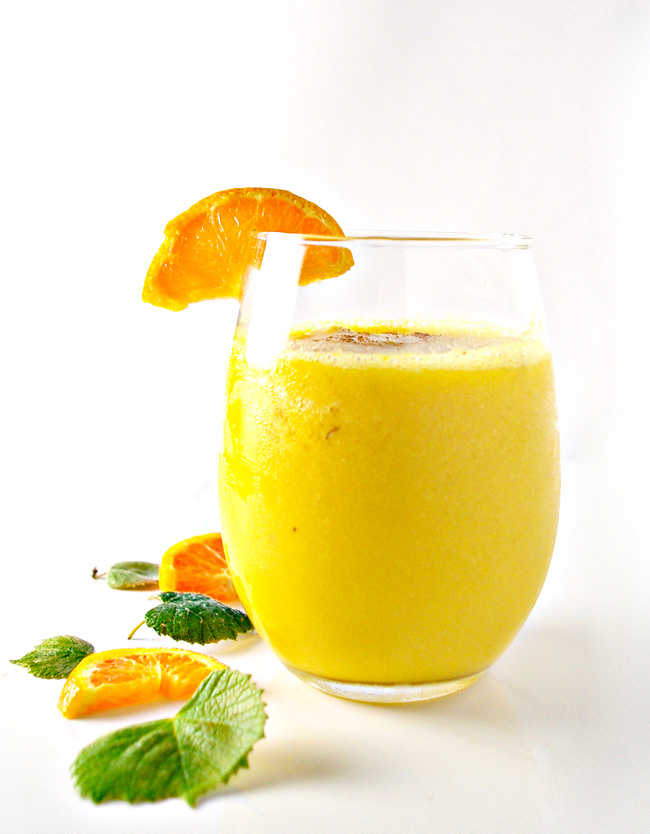 Way to sell this drink, right? “Lumpy slush.” But I come from a long line of precious chefs who used words like “goop” and “slurp” to describe only the best parts of a casserole or a seven course meal. Lumpy slush might as well become part of the lexicon, too, and to describe only the creamiest, most intoxicating dairy-free, gluten-free orange juice. Because that’s exactly what’s happening here. Cinnamon Vanilla Orange Juice, whether chilled overnight or frozen and then lightly thawed, is downright decadent.

K-Hubs and I are all over this stuff like the orange juice fanatics that we are. It’s over Cinnamon Vanilla Orange Juice that we make plans for the future and promises to each other. I promise to fully turn into some variation of Mom and The Gram in my old age. And he promises to sit on the yard and spray passersby with the hose. K-Hubs promises to keep an eye on gas prices and then alert me when they go down a few cents or more (actually, he already does this!). I, in turn, promise to chauffeur him around town in what will either be a VW Bug, Smart Car, Mini Cooper, or Lincoln Town Car. We’re keeping our options open.

Planning for the future, especially when you’re in a May-December relationship like we are, is terribly important. So you might as well do it over some Cinnamon Vanilla Orange Juice. Depending on how precious you get with your batch, yours may be ready in just a matter of minutes. I literally throw everything in the blender and call it a day. If you want to drink it right away, then throw in a few ice cubes during blending. This dairy-free orange juice recipe can also be made vegan or paleo, depending on the type of sweetener you use (if you use any at all). 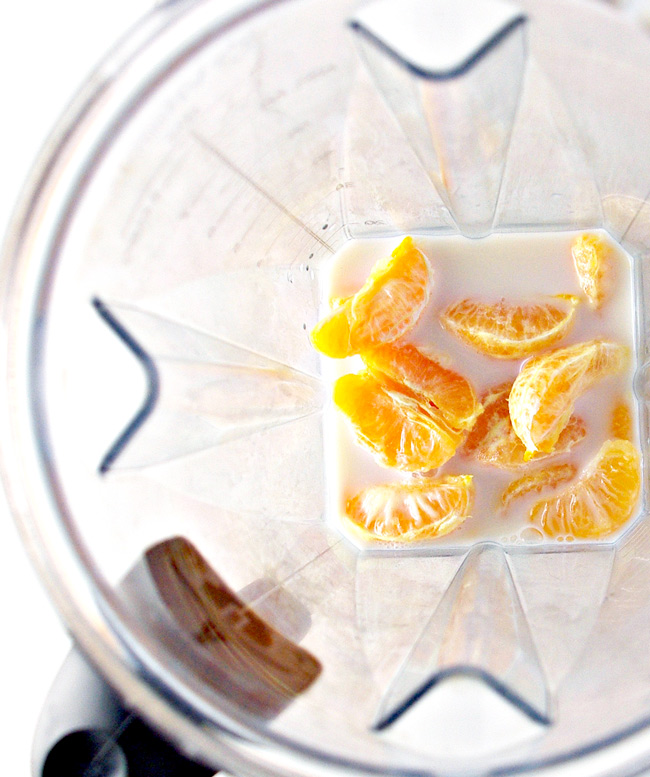 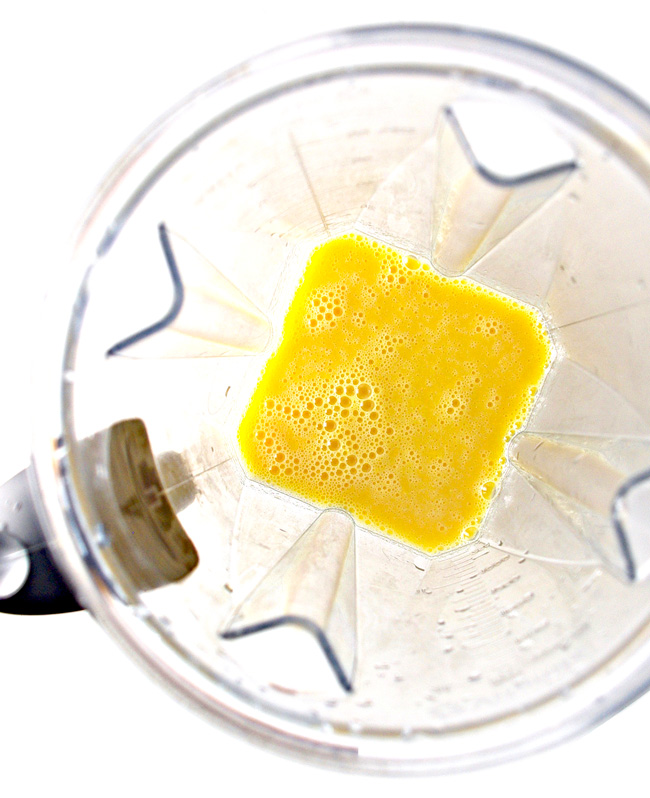 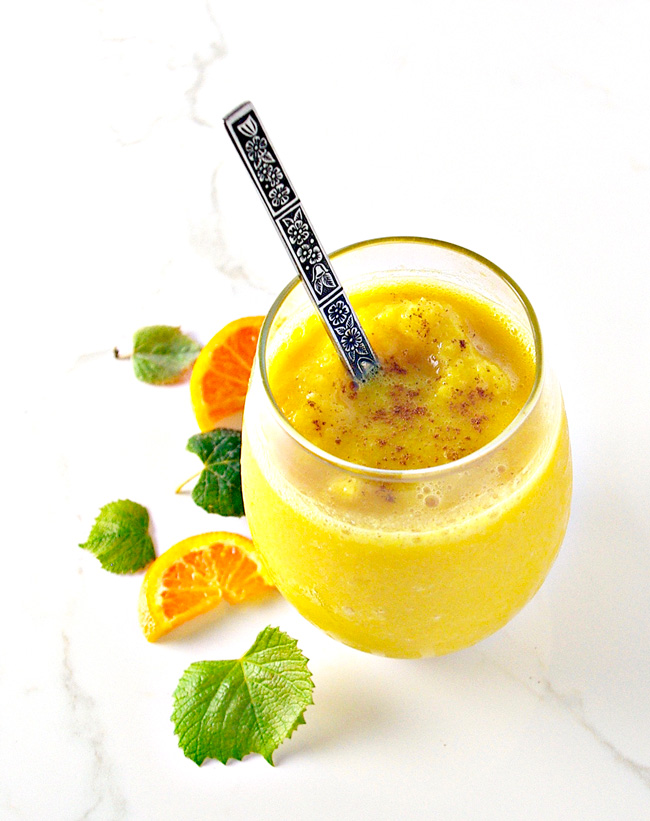 So, if you are bored with regular orange juice, are discombobulated by the ever-changing weather, or just want a citrus-sweet blend in the morning, then this Cinnamon Vanilla Orange Juice checks all of those boxes…and then some! 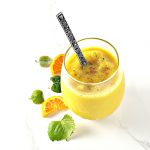 For a thicker orange juice, add an additional cup of oranges.