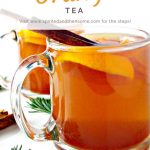 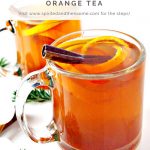 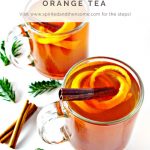 This cozy, comforting Cinnamon Orange Tea for one is ready to go in under 10 minutes! Made with black tea, a mandarin orange, honey, cinnamon, and cinnamon sticks (because we’re serious about our cinnamon, it’s a quick way to warm up. It pairs well with books, cozy blankets, and chilly nights or crisp mornings. But if you’d like to share with someone, it’s an easy batch to double or triple! {GF + DF}

I love tea and the people who drink it. I also love hearing about what these same individuals are doing while they savor a sip. For example, “I love a warm cup of Earl Grey while I read the most amazing Jane Austen novel.” Clearly a tie between Pride and Prejudice and Persuasion. Or, “At the first sign of a cold, I sip a cup of chamomile tea.” I want to be the first example, but more often than not, I’m the second. And I thought, What is even the matter with me? How can I love tea and geek out over it but never take the time to savor a cup? So I went to work on a new tea recipe. It’s perfect for chilly winter months, novels, and maybe even a cold or two. Cinnamon Orange Tea is HERE, and it is my new lovey.

So if you are in the market for a new tea recipe, then let me tell you a little more about this one. First, Cinnamon Orange Tea is rooted in a basic black tea. Nothing fancy, nothing hard to find. Just black tea. Then I throw in a mandarin orange, which I like to slice rather than peel into wedges. Next I add cinnamon, and finally I top it off with honey to taste. For best results, I suggest boiling the water first and letting the tea, orange slices, cinnamon, and honey steep for about 5-10 minutes before consuming. Those extra minutes allow enough time for the flavors to come alive.

So let’s dive in and make our own, shall we?

The great thing about this recipe is if you like tea and are in the mood for something a little sweeter than usual, then you’ll love the cinnamon-orange ingredients. They prevent the tea from becoming too bitter or bland.

This tea is so easy to make, I hope you love as much as K-Hubs and I do! The simple ingredient list makes it an easy recipe to try, and it’s a tasty twist on cozy tea recipes!

Tips to make your own warm, comforting Cinnamon Orange Tea

If you make a larger batch and have leftovers to store, then refrigerate the tea in a glass jar for about a day or two. I like to leave the orange slices and cinnamon sticks in the leftovers for extra flavor.

Other comforting drinks to try

There’s something so wonderful about a comforting drink that feels like a warm hug on a chilly day. So here are a few more beverages to try in the “cozy comfy” category! Enjoy! 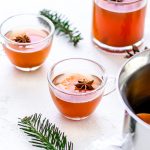 This cozy, comforting Cinnamon Orange Tea for one is ready to go in under 10 minutes! Made with black tea, a mandarin orange, honey, cinnamon, and cinnamon sticks (because we’re serious about our cinnamon, it’s a quick way to warm up. It pairs well with books, cozy blankets, and chilly nights or crisp mornings. But if you’d like to share with someone, it’s an easy batch to double or triple! {GF + DF}