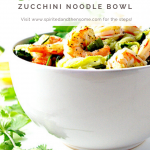 Zoodles + shrimp + lime + cilantro, all in a cozy bowl of gluten-free, grain-free, paleo goodness???? Yep, all of this amazingness in just one Cilantro Lime Shrimp Zoodle Bowl. 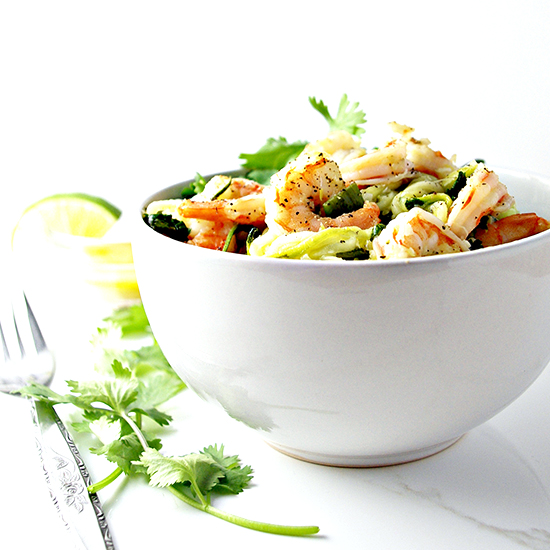 Let’s also talk zucchini noodles, or zoodles, as they are called on the street. If you haven’t tried zoodles, then you totally need to. No pressure, of course. I’m just firmly suggesting you run out to the store this very moment and buy a zucchini or two.

But zucchini is GREEN and it’s a vegetable, you say. Is it possible to like green, will it feel unnecessarily responsible, and will a part of you die inside? These are extremely fair questions. Okay, fine, they are the EXACT questions I had when I contemplated the zoodle. 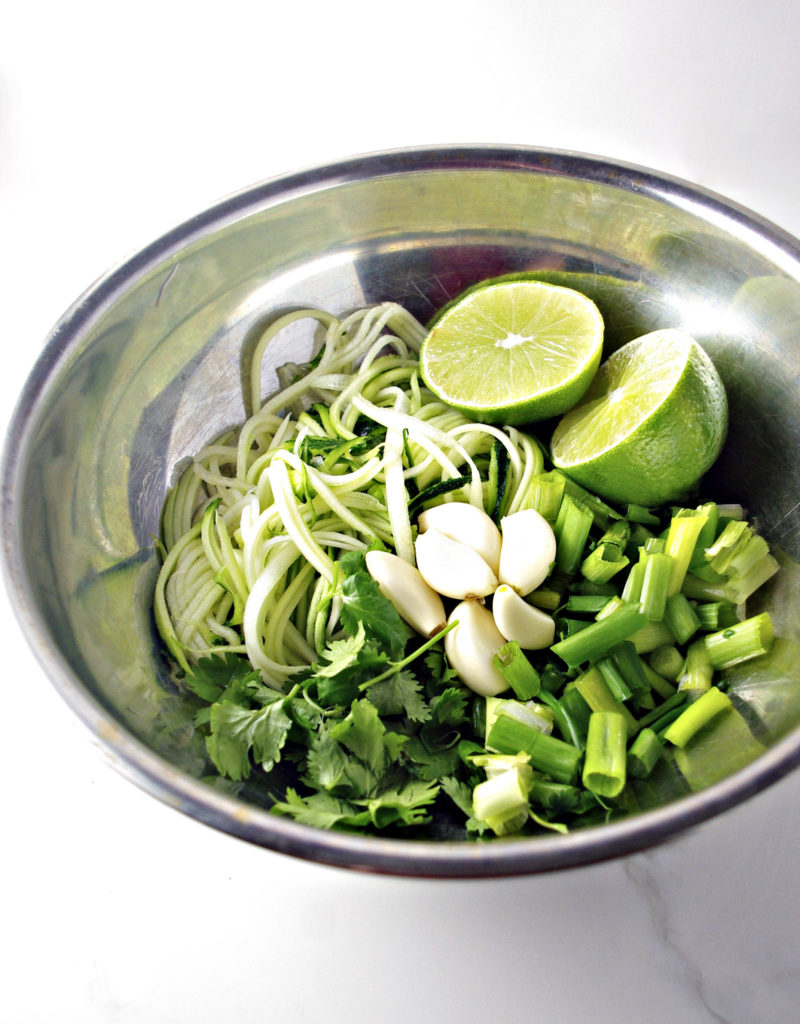 Let’s cut to the chase. Zoodle anxiety is unworthy of our time. If you have not traditionally been a paleo eater, or you’re trying to transition your diet to more fruits, vegetables, and proteins, then let me just say zoodles are an absolutely joy to eat. In fact, I prefer them now to yellow squash noodles. “Squoodles”? I don’t know if I can go with “squoodles.” However, the more I type it, the more it’s growing on me. Squoodles.

Bottom line? Ate zoodles once, addicted ever since. They are where this Cilantro Lime Shrimp Zoodle Bowl is at, and if I’m saying that, then you know zoodles have to be worth a try. Vegetables are a little like Fight Club for me. The first rule of vegetables is not to taste like vegetables. I’m going to need some dip or olive oil or three pounds of garlic. But to just sit and eat a raw carrot like it’s a joy or just because it’s healthy? Never. I need incentives. And this is a marked improvement over my childhood when, for me, eating a vegetable meant eating the cherries out of the fruit cocktail can. You know what I’m talking about. 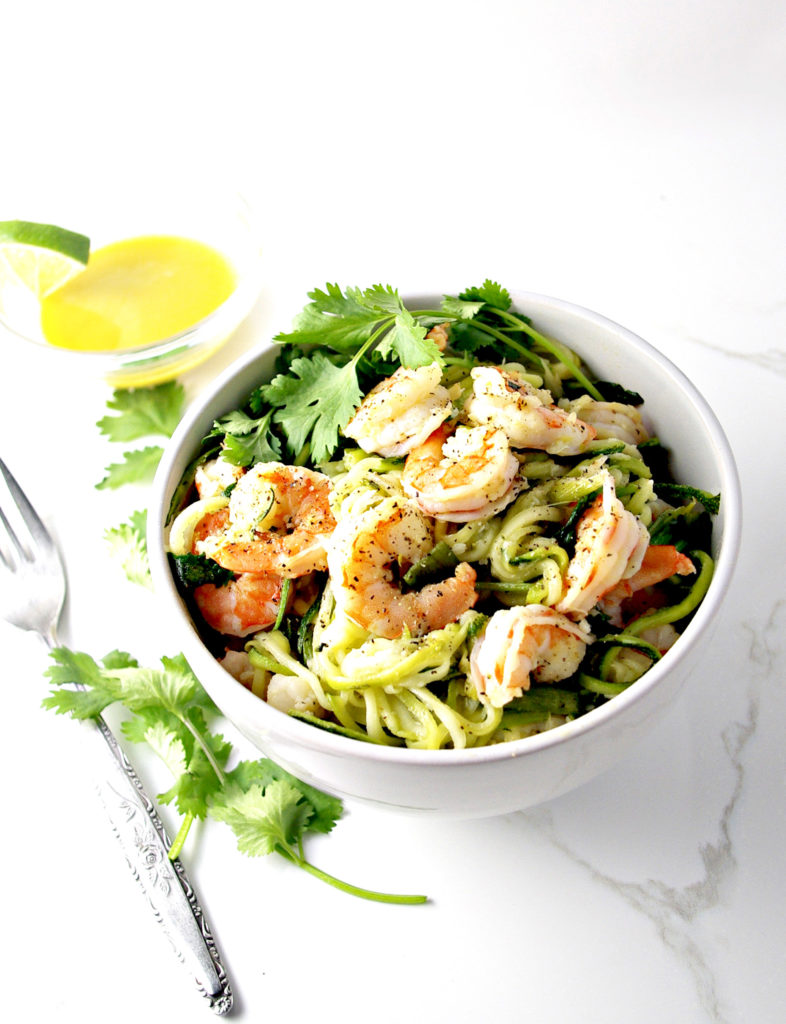 The incentive and the reward for this Cilantro Lime Shrimp Zoodle Bowl, however, are one and the same. THE FLAVOR. Other reasons to enjoy this recipe include a:

And then because our family is perpetually preparing for an impending vampire apocalypse, we throw garlic in the mix like tomorrow may never come. Oh, so good.

“Oh so good” has a sequel called “easy to make.” Think about this Cilantro Lime Shrimp Zoodle Bowl as being two parts brought together in the end for one amazing culinary experience. The first part is sautéing the shrimp in 1/8 of the 1/4 cup olive oil, along with three of the six cloves of garlic and all of the sea salt. After sautéing for approximately 6-10 minutes, or until the shrimp are cooked through and have absorbed the oil, garlic, and salt, I store them in a glass dish with a lid while I work on the zoodles.

Preparing zoodles isn’t tricky. Just throw the remaining olive oil and garlic cloves into the skillet with the julienned zucchini. Then use a fork to separate the zoodles and make sure the oil and garlic are distributed evenly. I only cook the zoodles for a few minutes because soggy zoodles make me sad. Just as the zoodles start to soften, then I add the cilantro, green onion, and lime juice, tossing everything together a few times in the skillet with my fork. God love the fork. Then I plop the seasoned zoodles into two bowls, top with shrimp, and sprinkle with pepper. Some might say an excessive amount of pepper, and I say guilty as charged. 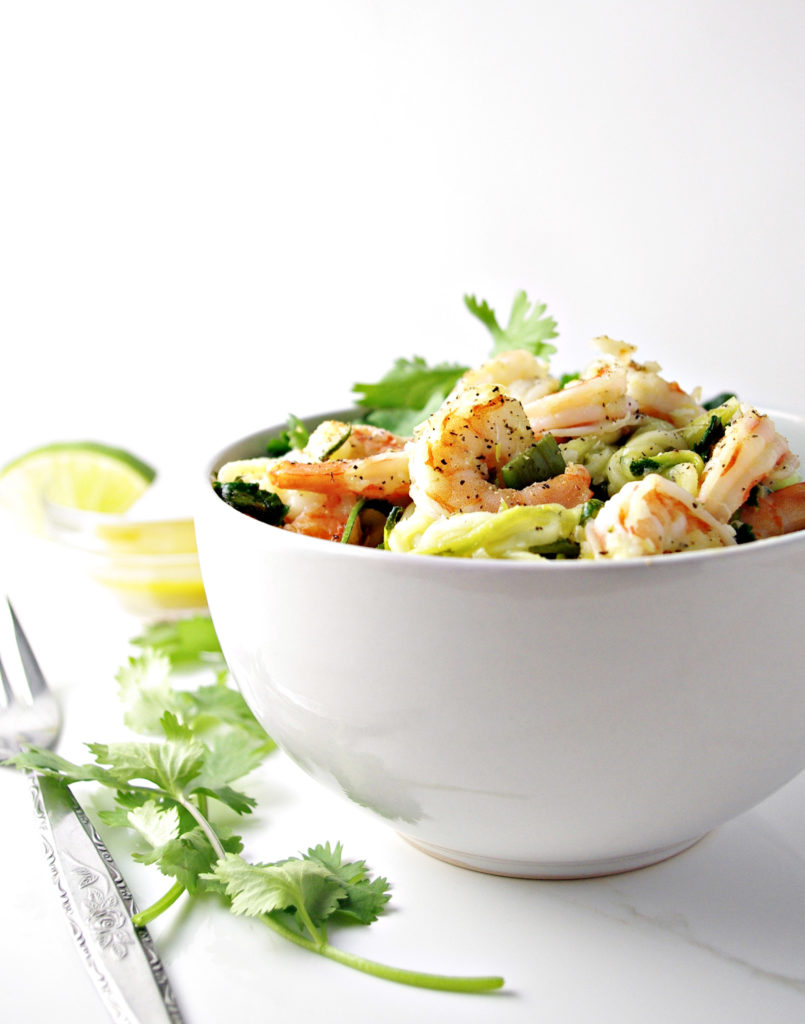 If, like me, you have a tendency to go big with the olive oil, too, you might notice once you are done preparing the meal a buttery sauce remains in the skillet. SAVE IT. I drizzled mine over the shrimp, cilantro, green onions, and zoodles. Best decision all day.

This paleo recipe is also the best choice all day if you want a tasty excuse to eat well or you’ve put the kids to bed and it’s now date night IN. Just make a batch, pop in a movie or watch a game or listen to the music, and let the succulent lime, pungent garlic, and distinct flavors of green onion and cilantro will pique your senses.

I felt like a million bucks sitting on the couch, watching ESPN highlights, and devouring my Cilantro Lime Shrimp Zoodle Bowl. The meal was restaurant quality. And sports? Well, just like zoodles, you can’t go wrong. 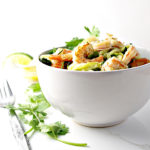