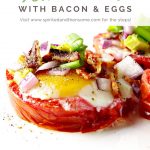 Juicy tomatoes serve as the cup for a soft, runny egg and crispy bacon in this paleo dish. Add onions and avocado to your Baked Tomato Cup with Bacon and Eggs for added flavor! 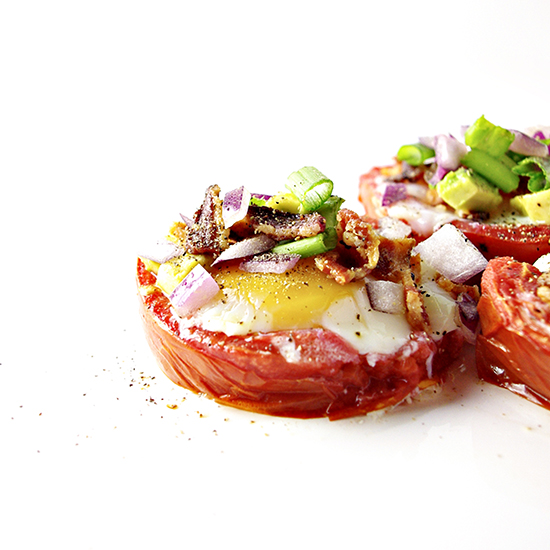 “What do people do for sandwiches if they don’t eat bread,” Toodle asked me on the way to school recently.”Well, they might use lettuce,” I said. 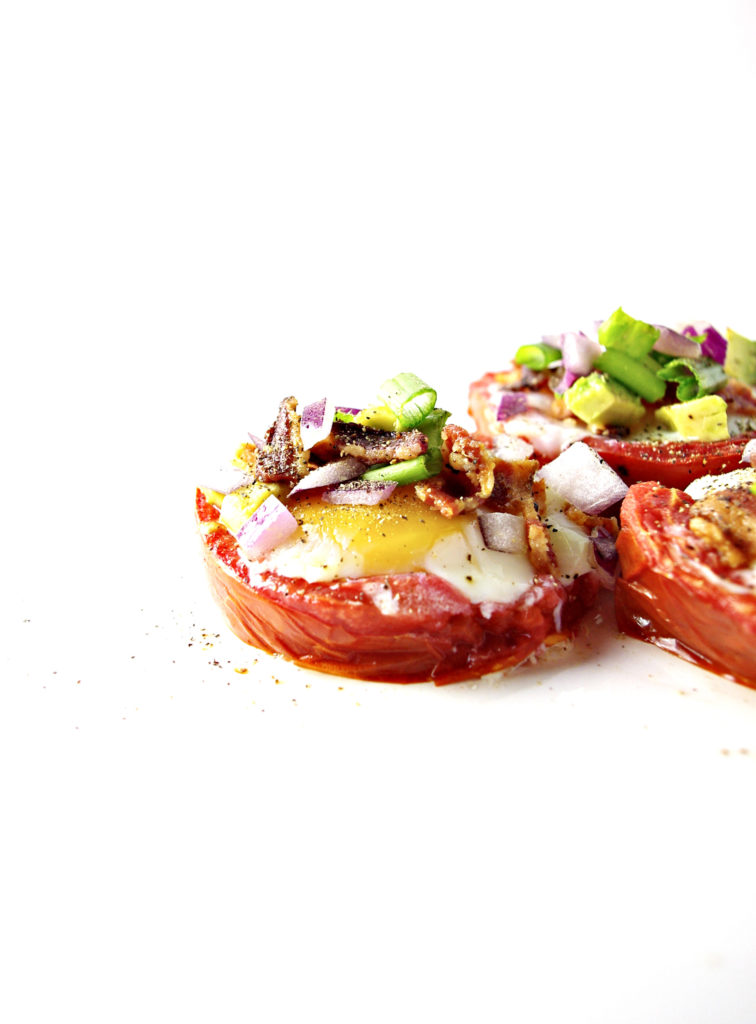 So we went along, discussing all the different ways a person could enclose a layered sandwich. In addition to various types of lettuce (like we use for Loaded Shrimp Tacos, One-Skillet Spicy Chicken Fajitas, and this Bacon, Lettuce, and Tomato Salad), we brainstormed a halved tomato, a scooped out avocado (in similar fashion to Crab-Stuffed Avocados), hamburgers acting as bread slices, and spinach leaves.

The tomato stuck with me. Although Toodle is allergic to them, others in our family have other allergies, so sometimes everyone just has to eat their own version of the same thing at dinner. And so I stuck with the tomato. What could I do with one? Could I repurpose it? It turns out, yes, the tomato is a versatile fruit. The bacon kick we’ve been on lately continues. So it made sense to find a way to pair the tomato with bacon again. Some sequels really are as good as the originals.

Enter an egg baked in a tomato “cup,” and topped with crispy bacon, diced avocado, red onion, and pepper. I confess to salivating at the mere thought.

I also confess to logistical issues with creating this Baked Tomato Cup with Bacon and Eggs. There are countless ways to prepare a tomato to become an egg cup. I tried a few. A common method is to trim the top off and core out the center. The egg cup will resemble a barrel, which made me the think of “Rub a dub dub, three men in a tub…” It is practical for getting the right cup shape. But I found it took longer to bake, and I wanted a wider surface for the toppings.

Then I trimmed the top, just enough to remove the leaves and stem, leaving the tomato intact, and halved it from top to bottom. This created an oblong boat, from which I scooped out the center and left a little of the top of the tomato so the “boat” would have four sides. When I first tried this, I cored the center out first and THEN halved. Because I cleared out the top, when I halved the tomato, I only ended up with three sides, allowing the egg to run out one side.

It wasn’t as terrible as I thought it would be. The egg stayed in place fairly well. But in my final version, I trimmed the top of the tomato just enough to remove the leaves (but not to get into the center), halved it, and then scooped out the center. This gave me the four sides I needed to keep the egg firmly in place and to make adding toppings much easier to do. 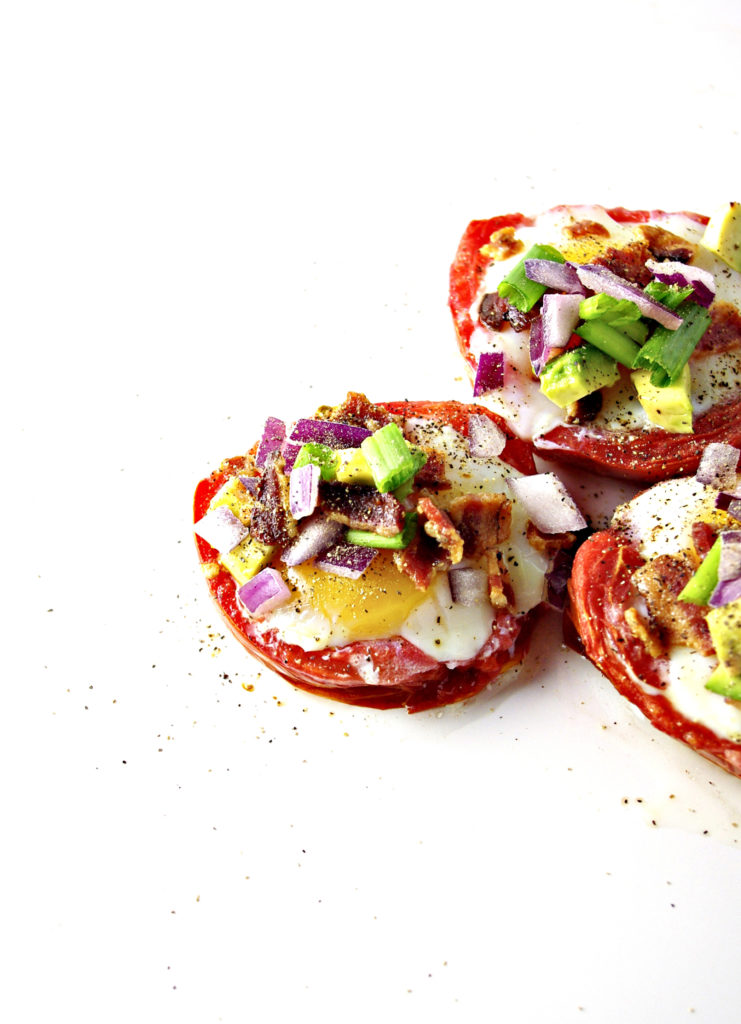 What do you need to know about this Baked Tomato Cup with Bacon and Eggs? Only that it is amazing and delectable and so freaking juicy. Oh. My. Gosh. It is juicy, which is the perfect foil to the crispy bacon and diced onion. The diced avocado and soft egg also provide a contrast your palate will enjoy.

I chose to bake these in a glass baking dish. You could use ramekins or a muffin tin. However, I found the baking dish to be the mot flexible for shape and size. The tomatoes stayed in place during baking, and while some of the egg white did run out a little, the drippings weren’t enough to tarnish the recipe.

The olive oil from the baking dish also provided a richness that took this recipe from delicious to mind blowing. So good. And for the record, I did not burn down the kitchen. There was a moment when the olive oil started bubbling, and I flashed back to chemistry class my senior year of high school when I did the at-home science project and burned sugar granules into Mom’s saucepan. Whoops.

Or the time Mom and I deep-fried frozen shrimp in oil on the stove. What. A. Scream. We were too much. Especially since that DID turn into a fire, a small one, fortunately. By early spring of seventh grade, I was an expert painter. Take that, Bob Villa. Actually, probably we could have used his help that day. He would have said, “Why are you deep-frying cheap frozen, breaded shrimp in oil in a galley kitchen? Why? When was that ever going to be a good idea?” All fair questions, Bob, and I have no answers. 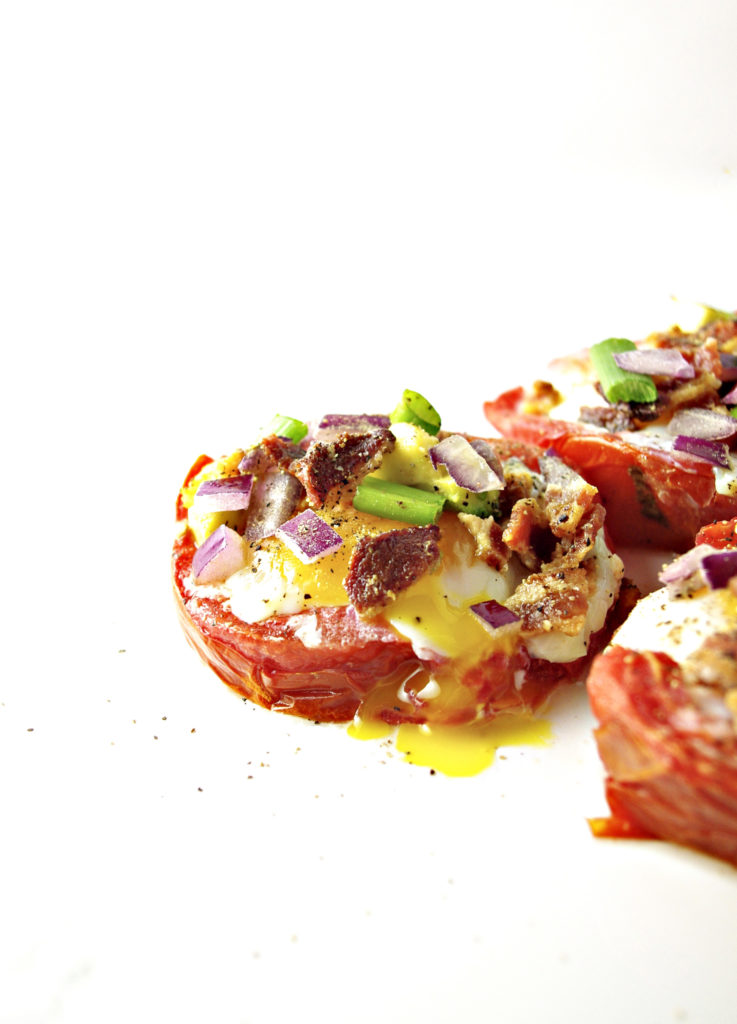 But the kitchen didn’t burn down when I made this Baked Tomato Cup with Bacon and Eggs. The olive oil was a good choice. And I don’t bake this at a temperature any higher than 400 degrees. Why else is this tomato cup topped with dollops of goodness worth your time? Because it just screams flair. The tomato was destined to be an egg cup topped with bacon, avocado, red onion, green onion, all the onions, really, and sprinkle dashes pepper. Don’t get in the way of destiny. Additionally, this egg cup is perfect because it:

So get going. You. Tomato. Egg. Bacon. Other food accoutrements. This is happening. Because destiny. Because I just checked my watch. It is most certainly snack-thirty, and this Baked Tomato Cup with Bacon and Eggs is waiting for you!

I found I could reduce the prep time by getting the bacon started while I worked on prepping the tomatoes, eggs, and toppings, finishing the bacon while the tomatoes and eggs were baking in the oven.