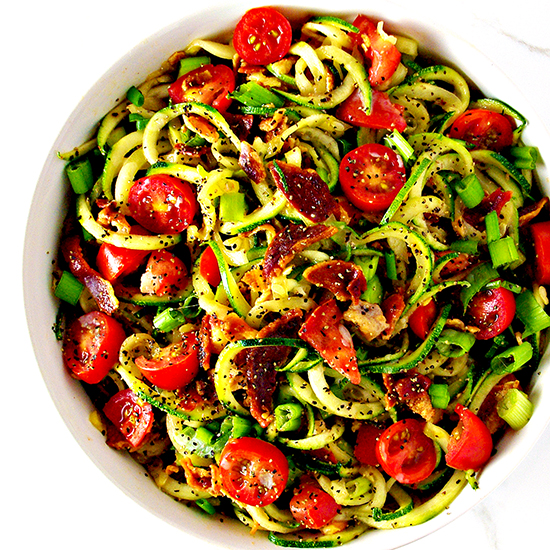 Bacon + zucchini noodles + tomatoes = YUMMO. Spiriteds, I love bacon. I really, really do. And if I can eat bacon in a salad, then I’m in heaven. And today’s Bacon Zoodle Salad is all of that and so much more.

Except for the part where it’s less.

As in, less is more. Because this Bacon Zoodle Salad is not fussy. It’s not high maintenance. And the only thing over-the-top about it is the incredible bacon flavor combined with succulent zucchini noodles, luscious green onions, and juicy tomatoes. A hint of black pepper, a sprinkle dash of garlic powder, and a splash of lemon juice finish off the recipe. Spiriteds, we’re still in the throes of summer, and I refuse to complicate my recipes. I want easy living, big flavor, and time to soak up some rays. Because before I know it, I’ll be knee-deep in snow and below-zero temps, complete with Dairy-Free Hot Chocolate and Christmas movies, like Santa Conquers the Martians (the Mystery Science Theater 3000 edition) and Die Hard. Yes, the latter is a Christmas movie. Even Justin Trudeau says so. 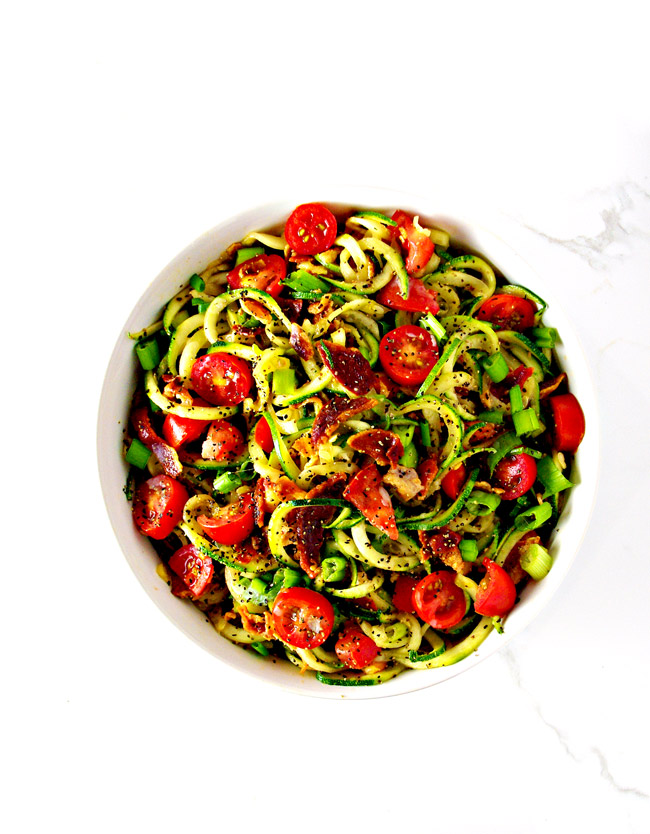 But let’s say it isn’t the middle of summer, and you aren’t soaking up the sun’s rays. Can you still enjoy some Bacon Zoodle Salad in the middle of, say, autumn or winter? Oh my word, YES!!!!! But what does Justin Trudeau think? I don’t know. I haven’t asked him. But if he thinks Die Hard is a Christmas movie, then I’m certain he’ll agree Bacon Zoodle Salad is a year-round thing.

What about for meal prep? Can Bacon Zoodle Salad be prepared ahead of time and then eaten the next day?

Okay, so, yes, Bacon Zoodle Salad is delicious the next day. Possibly even better because the bacon flavor has had time to set in. However, I always caution about zoodles for meal prep. Zucchini noodles contain a lot of water. If you don’t properly remove the excess water prior to prepping your Bacon Zoodle Salad, you do run the risk of waking up to a soggy mess the next day. 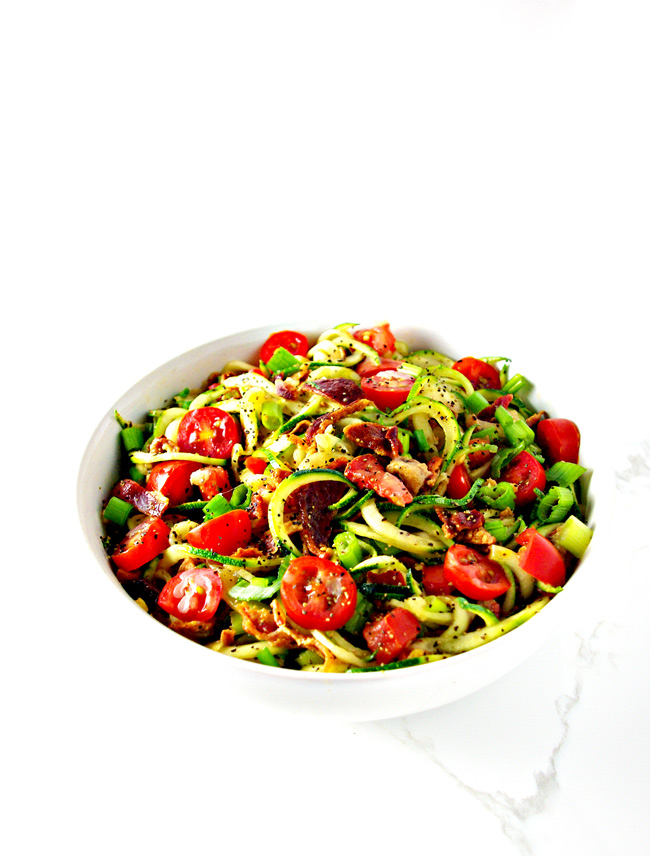 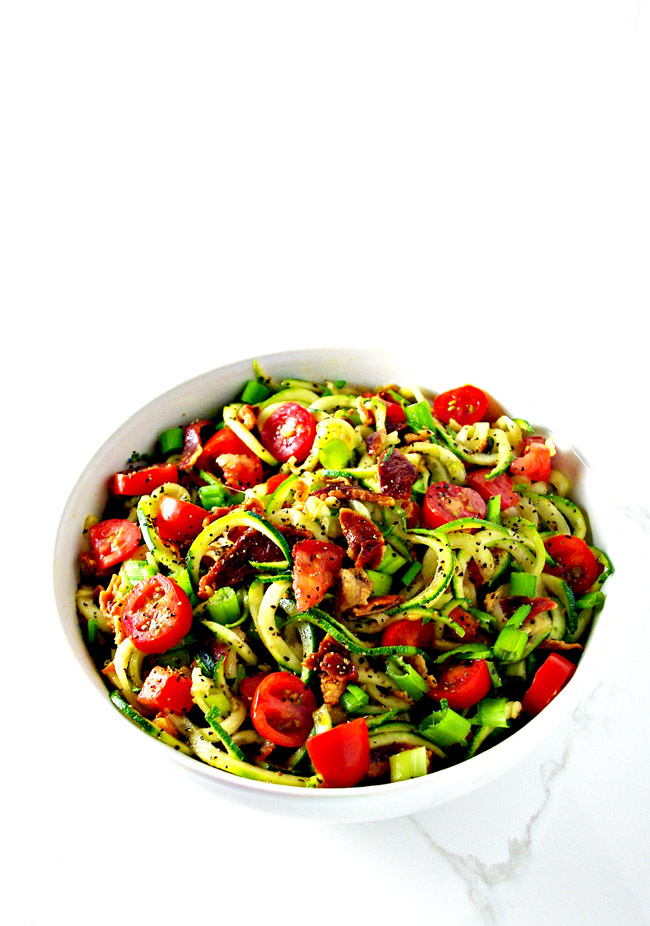 So what’s the best way to remove the excess water? Lay your zoodles out on paper towels, napkins, or a thin, country-style dish towel. Thicker, even water-absorbent, towels are sometimes too thick to really do this job well. I lay my zoodles out for about 20-30+ minutes while I crispy-fry the bacon. I don’t rush the effort, and I end up with succulent, balanced zoodles. The next day, my Bacon Zoodle Salad is intact.

Also, if you decide to add a little more bacon to your salad, then so much the better. I use a pound of bacon as a starting point, try not to sneak too many bites while the bacon fries, crumble the cooked batch into the salad, and then decide from there whether I want to add more. Let’s take a minute to discuss bacon in gluten-free, paleo-friendly recipes. Paleo bacon is available in the marketplace. A quick search of the internet will tell you as much. In my case, we work with a local farmer who sells directly to our local grocery store. While it isn’t officially labeled “paleo,” it is low in ingredients, free of many additives, and gluten-free. 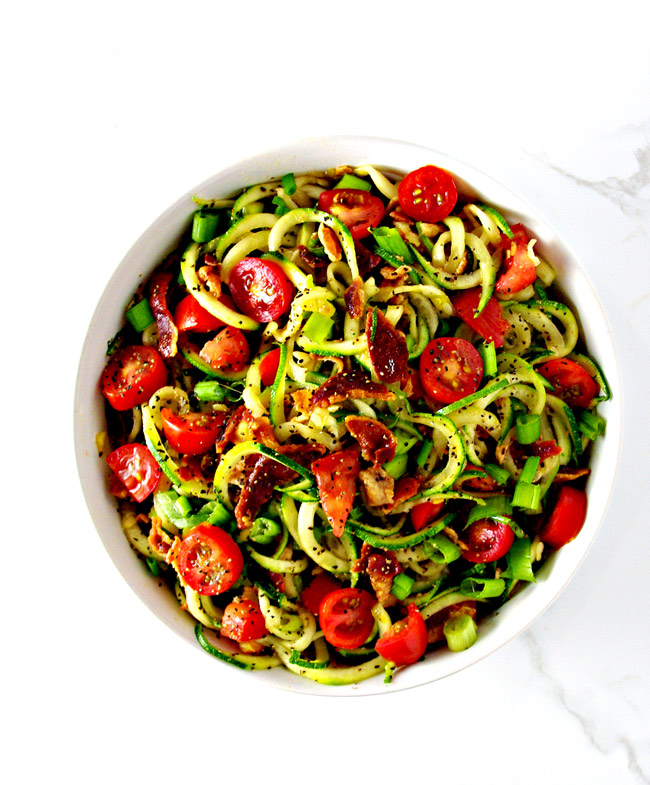 Oooh, and let’s talk seasonings. Definitely YES on the coarse black pepper. MAYBE on the sea salt since bacon is already typically quite salty. I say add it at the very end, and only if you think it’s absolutely necessary. And FOR SURE on garlic powder. It really does the trick bringing the zoodle and bacon flavors together.

As for the onions and tomatoes? Also definite yeses. Green onion is perfect here because it adds just the right amount of flavor without overpowering the other ingredients. As for those juicy tomatoes? Without them, the salad just isn’t the same. I also gotta say olive oil and lemon juice in this recipe make for a pretty dynamic duo. Like the garlic powder, they do an excellent job of bringing everything together without overpowering the other flavors.

And there you have it. Bacon Zoodle Salad, at your service. A delicious crunchy salad that brings out the best in everything around it. I’m just sure Justin Trudeau would agree.

Paleo bacon is available in the marketplace. For my recipes, I purchase bacon from a local farmer who sells it through our local grocery store. It isn’t officially marked paleo, however it is gluten-free and contains ingredients that work for our family’s needs. With diligent searching, both on the internet and in your local community, you may find a source that works best for you, too. And I often add more than a pound of bacon to these types of recipes, if I am in the mood for extra crunch! Best of luck!